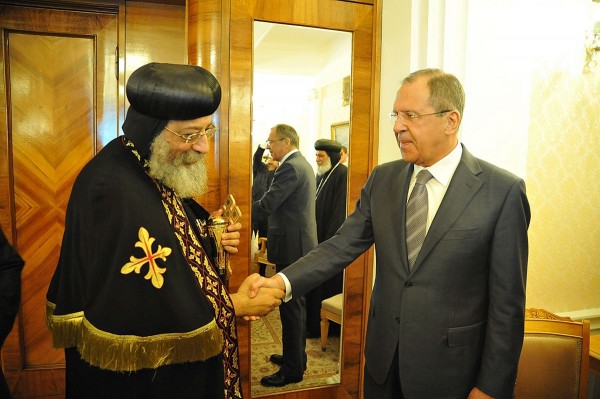 Taking part in the meeting on behalf of the Russian Orthodox Church were Metropolitan Hilarion of Volokolamsk, chairman of the Moscow Patriarchate’s Department for External Church Relations (DECR); Rev. Viktor Kulaga, representative of the Patriarch of Moscow and All Russia to the Patriarch of Alexandria; hieromonk Stefan (Igumnov), DECR secretary for inter-Christian relations; and Rev. Iliya Kosykh, head of the DECR Communication Service.

While greeting Patriarch Tawadros, Minister Lavrov underscored that relations between the Churches were a foundation of the development of Russia’s relations with the countries of the Middle East and North Africa. He appreciated the efforts undertaken by the Coptic Church and by its Primate for keeping the interconfessional and interethnic peace in the region.

Patriarch Tawadros said that his dream to visit Russia had come true and he was very glad to be here. He said that Christians and Moslems had lived in the region for fourteen centuries, and though they had problems, they had tried to solve them in the spirit of love and life as in one family. The Patriarch believes that the Middle East without Christians will become a source of many problems which can bring about clashes and wars among the big countries of the world.

Patriarch Tawadros is convinced that the presence of Christians in the region is a basis for keeping peace and accord there. He gave examples of friendly coexistence of Christianity and Islam in Egypt, of joint projects of religious communities and noted good attitude of the authorities to Coptic Christians.

Minister Lavrov noted that the Russia state would always support peace initiatives, including those displayed in the frame of the inter-church dialogue.

Patriarch Tawadros expressed his gratitude for support rendered to Christians in the Middle East and assistance to the peace process and added: ‘While visiting the Russian Orthodox Church we try to strengthen our relations.’

In conclusion of the talk, Metropolitan Hilarion thanked Minister Lavrov for the meeting on behalf of all those present and ended his address by saying: ‘The Russian Federation is the only big state of the world which has made the defence of Christians a vector of its foreign policy. I would like to assure Your Holiness that our State and our Church work together for upholding the presence of Christians in the Middle East and for their living in peace and accord with the followers of all other religions.’