Russian Foundation to deliver Holy Fire from Jerusalem to Crimea

Source: Interfax-religion
Natalya Mihailova | 10 April 2014
Moscow, April 9, Interfax - The Foundation of St. Andrew the First-Called is organizing a delivery to Crimea of the Holy Fire from the Church of the Holy Sepulchre in Jerusalem. 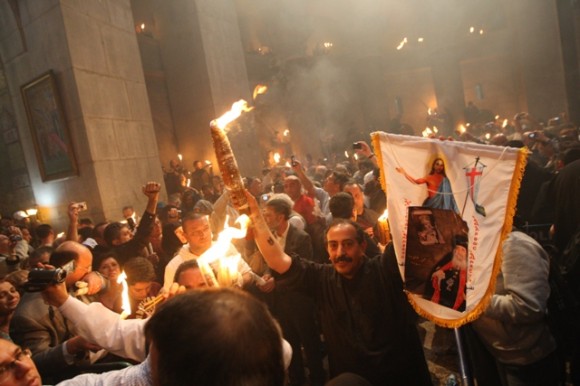 Moscow, April 9, Interfax – The Foundation of St. Andrew the First-Called is organizing a delivery to Crimea of the Holy Fire from the Church of the Holy Sepulchre in Jerusalem.

“On the joyous Easter holiday, the Holy Fire will be delivered to Simferopol and Sevastopol where it will be met by representatives from the local diocese, senior Crimean and Sevastopol officials, as well as sailors from the Black Sea Fleet,” the Foundation told Interfax-Religion.

On April 19 the Foundation will have the Holy Fire delivered by a special flight for the Easter patriarchal service at the Christ the Savior Cathedral.

A Foundation’s delegation led by the chairman of its trustees’ board, Russian Railways CEO Vladimir Yakunin, and the vicar of the Patriarch of Moscow and All Russia, Bishop Savva of Voskresensk, will travel to Jerusalem to collect the relic.

Also, Director of the N.I. Borodina Russian Center in Merano, Italy, Andrey Pruss will deliver the Holy Fire to Rome later this year.

The Holy Fire is a miracle that occurs at the Church of the Holy Sepulchre in Jerusalem on the Holy Saturday. The event was described for the first time by Russian monk Daniel who undertook pilgrimage to the Holy Land in the early 12th century.