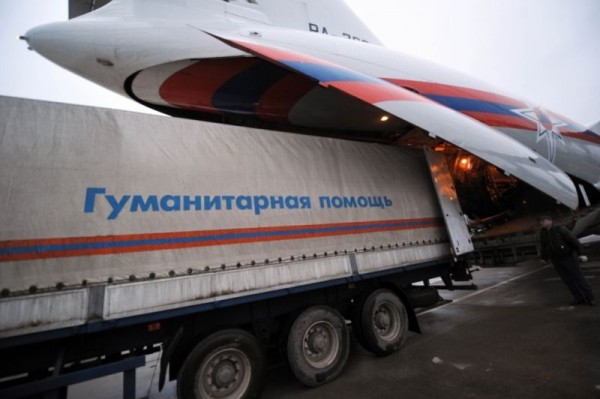 “Today Russian government ordered a special emergency jet to take off from Moscow regional airfield Ramenskoye to (the principal port city of Syria in the Mediterranean Sea) Latakia with relief supplies on board. The plane will supply more than 25 tons of canned meat and fish, sugar and baby food for Syrian residents,” he said.

This emergency jet will bring people who wished to leave the armed conflict zone back to Moscow from Latakia by a return flight.

For the last 18 months Russia has delivered 30 jets with relief supplies to Syria with assistance of the domestic government and the Russian Orthodox Church, St. Andrew the First-Called Foundation, Imperial Orthodox Palestinian Society and other agencies of Russian public society, Russian Foreign Minister Sergey Lavrov said.

Most viewed articles
On Feeling Forsaken142
Patriarch Kirill: We In No Way Question the Healing Power of the Holy Mysteries of Christ!125
Lessons from Saint Mary of Egypt123
Ethiopian Patriarch Thanks Patriarch Kirill For the Support During the Persecution96
Maronite Patriarch Thanks Russian Patriarch for His Support for Christians in the Middle East85
Food for the Journey25
The pandemic is a significant examination for us all, Transylvania Metropolitan says7
Sunday of the Samaritan Woman1
Creation in Genesis1
Athens and Jerusalem: the Role of Philosophy in Faith, with Analysis by St. Gregory Palamas1
Most popular authors
Pravmir.com team306
Archpriest John Moses (+2019)142
Justin Doty123
Dcn. Michael Schlaack25
Aurelian Iftimiu7
Eric Hyde1
Archpriest Geoffrey Korz1