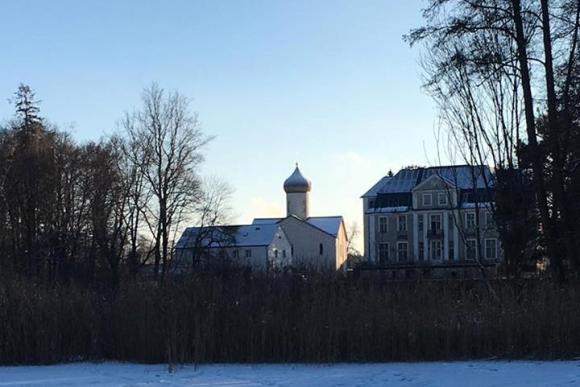 “Angela Merkel’s father Horst Kasner, who was an Evangelist pastor of the district, helped us to realize the plans of opening the monastery in Götschendorf,” rector of the monastery, member of the Integration Committee at the chancellor’s Federal Administration Hegumen Daniil (Irbits) told Interfax-Religion

According to the priest, “almost painlessly, without unnecessary bureaucracy, all questions on the cloister’s legal affairs are settled.”

He told that he had recently met with Merkel at the summit on integration in Berlin. Her country residence is located not far from the monastery.

“In this connection, Mrs. Merkel shows sincere interest to the affairs of the monastery,” Irbits said.

He said that the church in monastery had almost been built, when financing from Russia was suspended due to the financial problems of Vnesheconombank that helped the convent.

The Berlin Diocese of the Russian Church acquired castle Gotschendorf for symbolic one euro in 2006, it was built in 1915, and in the years of the Nazi Germany it was a guest country house belonging to Reich marshal Hermann Goring.

Later a resort for officials of the GDR State Security Ministry was located here. After the reunion of Germany in 2006 this territory was left without master.

The Church of St. George the Victory-Bearer is now constructed in the territory, the monastic life was organized. It is supposed that a Russian spiritual and educational center will be set up in the monastery.

In May 2015, commemorative cross-monument dedicated to the 70th anniversary of the Victory in the Great Patriotic War was set up and consecrated in the monastery. In September 2016, old icons taken from Russia to Germany during World War II were transferred to the monastery. It was the initiative of their former owner, son of the war participant.