Source: DECR
Natalya Mihailova | 13 August 2014
With a blessing of His Holiness Patriarch Kirill of Moscow and All Russia, a Russian Orthodox pilgrim group led by Metropolitan Veniamin of Ryazan and Mikhailovo has arrived at the Russian Monastery of St. Panteleimon on Holy Mount Athos to take part in the celebrations devoted to the monastery’s patron saint’s day. 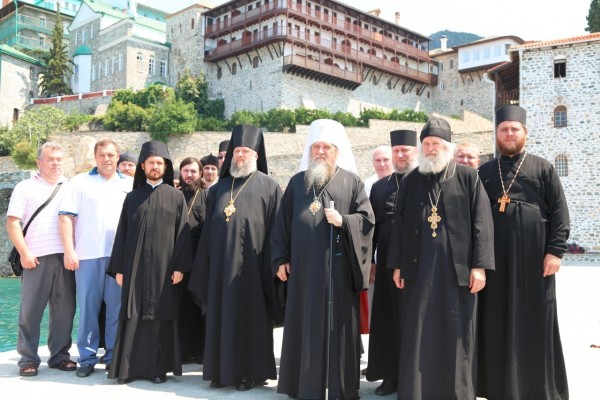 In accordance with the ROC Holy Synod decision of May 30, 2014, the group also includes Bishop Ioann of Brestsk and Kobrin, Bishop Iona, vicar of the diocese of Kiev, Archimandrite Filipp (Vasiltsev), representative of the Patriarch of Moscow to the Patriarch of Bulgaria, and the Rev. Daniel Boikov of the Ryazan diocese.

Taking part in the pilgrimage are also Ryazan Mayor B. Artemov, Ryazan mayor adviser A. Levushkin and clergy of the Ryazan Metropolis.

On Friday, August 8, the eve of the celebrations, All-Night Vigil was celebrated at the main church of the monastery and the Divine Liturgy was led on the feast day by Metropolitan Veniamin. Present at the service was the Civil Governor of Mount Athos Aristos Kasmiroglou and General Consul of the Russian Federation in Saloniki A. Popov.

After the service, the congregation walked in a precession with the cross around the main church, after which Metropolitan Veniamin read out a congratulatory message from His Holiness Patriarch Kirill to the abbot of the monastery Archimandrite Jeremiah. He also presented the monastery with an icon of St. Basil, the patron saint of Ryazan, asked the brethren to pray for Holy Rus’ and wished God’ help to all the monks in performing their monastic feat.

On the same day, the Great Vespers was celebrated in the monastery and the service for the dead was said for the late monastery wardens. Present at the service was Archimandrite Ephraim, abbot of the Vatopedi monastery. During the common meal after the service, Father Ephraim made a speech emphasizing the spiritual unity existing between Holy Rus’ and Holy Mount Athos.