Source: DECR
Natalya Mihailova | 15 December 2015
In compliance with the decision of the Holy Synod, a delegation of the Moscow Patriarchate took part in a joint conference of the Russian Orthodox Church and the Evangelical Church in Germany (EKD), which was held in Munich on 10-11 December 2015, and was dedicated to the 70th anniversary of the end of World War II. 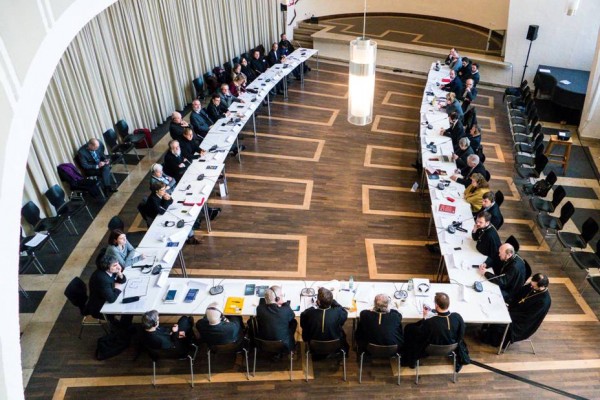 As Metropolitan Hilarion noted in his address, among those who fell victim to the war were representatives of all confessions and religions. The archpastor focused on the heritage of a Lutheran pastor, Dietrich Bonhoeffer, who was executed by the Nazis. Metropolitan Hilarion also dwelt on the role of the Russian Orthodox Church and the Evangelical Church in Germany in promoting reconciliation between the peoples of the two countries. As the DECR chairman pointed out, the liberal understanding of Christian moral values, developed in Western Protestant Churches in recent decades, became the reason for the suspension of the bilateral theological dialogue which began in 1959. At the same time, new challenges and tasks have arisen, urging Christians of various countries to develop cooperation, Metropolitan Hilarion noted. Nowadays, a Christian’s duty is not only to promote reconciliation in numerous conflicts flaring up in different parts of the world, but also to exert every effort to save Christians and preserve Christianity in the Middle East. To conclude his address, Metropolitan Hilarion noted the significance of joint projects in the sphere of theological education.

Greeting all those present at the conference, Bishop Heinrich Bedford-Strohm emphasized the importance of developing cooperation between the Russian Orthodox Church and the Evangelical Church in Germany in upholding the Church’s right to openly express its opinions and be an equal member of civil society.

To mark the conclusion of the conference, its participants visited the Dachau Concentration Camp Memorial Site and commemorated the victims of the Nazi regime at the Protestant Memorial, Church of Reconciliation, and the Russian Orthodox Church of the Holy Resurrection.