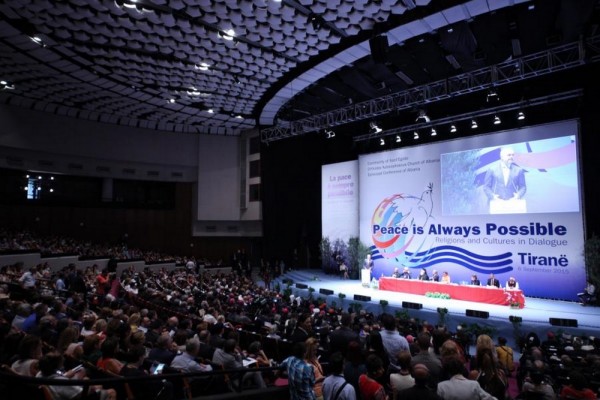 With the blessing of His Holiness Patriarch Kirill of Moscow and All Russia, the forum was attended by an official delegation of the Russian Orthodox Church including Metropolitan Ignaty of Vologda and Kirillov, Archimandrite Anthony (Sevryuk), administrative secretary of the Moscow Patriarchate Parishes in Italy, and Hieromonk Stephan (Igumnov), DECR secretary for inter-Christian relations.

The forum was hosted by the Albanian Orthodox Church and the Catholic Bishops’ Conference in Albania. It was greeted by His Beatitude Anastasios, Archbishop of Tirana and All Albania, Albanian President Bujar Nishani and Prime Minister Edi Rama.

The forum worked in numerous round tables devoted to concrete humanitarian problems of today, such as the situation in Syria, Iraq and Libya, the problem of migrants and the issues of interreligious dialogue. Among the speakers were Patriarch Ignatius Ashram II of Antioch and All the East, Syrian Jacobite Church; Patriarch Louis Raphael Sako I of the Chaldean Catholic Church, representatives of Local Orthodox Churches, the Roman Catholic Church and the Protestant world, as well as Muslim and Jewish religious leaders and representatives of Buddhism and Sintoism.

Metropolitan Ignaty voiced the position of the Russian Orthodox Church on the persecution of Christians in today’s world. In his remarks, he noted in particular, ‘We cannot help being concerned over the ousting of ethnic Serbians from Kosovo, their native land, and the destruction of Orthodox churches and monasteries, which are not only shrines but also monuments of the world significance’.

He stated that religious values as a whole and Christian moral values in particular are ousted today to the periphery of the human civilization.

The forum adopted a joint declaration addressed to world political leaders and calling them to exert every effort for solving humanitarian problems in the world.

During their stay in Albania, the delegation of the Russian Orthodox Church met with the Russian ambassador A. Korpushin.