Source: DECR
Natalya Mihailova | 09 October 2015
On October 9, 2015, the Dialogue of Civilizations world public forum began its 13th plenary session on Rhodes Island, Greece. Some 500 experts in politics, economics and culture, statesmen and religious leaders, scholars and journalists from 80 countries will discuss prospects for human development in the present situation of socio-political changes, economic instability and challenges to traditional morality. 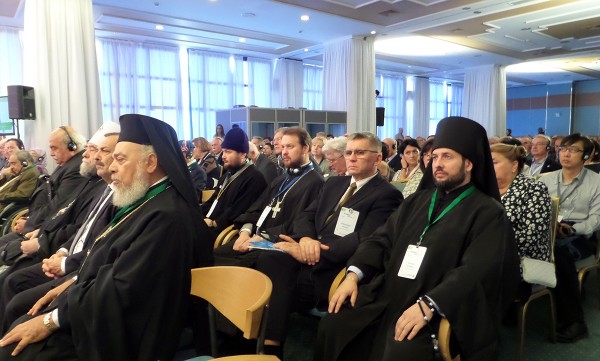 With the blessing of His Holiness Patriarch Kirill of Moscow and All Russia, the forum will be attended by a delegation of the Russian Orthodox Church including Metropolitan Vladimir of Omsk and Tara, Archpriest Nikolay Sokolov, rector of the St. Nicholas church at the Tretyakov State Gallery, and Hierodeacon Roman (Kiselev), DECR secretary for the far abroad. Archpriest Constantine Pilipchuk, secretary of the Ukrainian Orthodox Church diocese of Kiev and Archpriest Oleg Tsvetkov, secretary of the diocese of Omsk, attend the forum at the invitation of the organizers.

The speakers noted that in the discussion on dialogue of various cultures and nations today, an important place should be given to the idea of justice and equal rights. They dealt with such themes as the need for restrain in using military force for political purposes, the nature of power and its impact on people’s life, relationships between economic crises and the large gap in the income of various members of society and the erosion of family values in today’s Europe. Special emphasis was put on the threat of rapidly growing extremism and terrorism, especially the danger coming from the Islamic State radical group which uses religious slogans to justify its political aims. The discussion also dealt with the mass flow of refugees rushing to Europe.

The forum will continue its work in seminars and round tables and complete its work at the final plenary session on October 11.