Source: DECR
Natalya Mihailova | 09 September 2014
On September 7, 2014, the international religious forum “Prayer for Peace” began its work in Antwerp, Belgium. It has been held annually since 1986 by the Community of St. Egidio, a Catholic lay association. This year the meeting is timed to the centenary of the beginning of World War I and held under the theme “Peace Is the Future”. 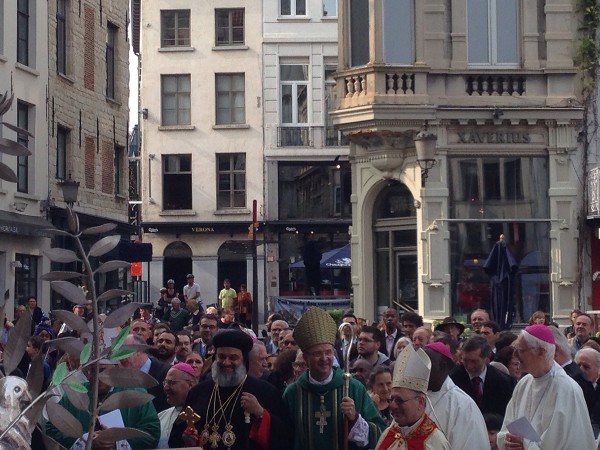 With the blessing of His Holiness Patriarch Kirill of Moscow and All Russia, the Russian Orthodox Church is represented by an official delegation which includes Metropolitan Pavel of Minsk and Slutsk and Archimandrite Anthony (Sevryuk), secretary of the administration of the Moscow Patriarchate parishes in Italy. Among those invited by the organizers is Bishop Nikolay of Vasilki, Ukrainian Orthodox Church.

In the morning a Solemn Mass was celebrated at the city Catholic cathedral by Bishop Johan Bonny of Antwerpen. Cardinal Roger Etchegaray, vice-dean of the College of Cardinals, Cardinal Paul Poupard, honorary president of the Pontifical Council for Culture, and Archbishop Vincenzo Paglia, head of the Pontifical Council for the Family, and other prelates of the Roman Catholic Church concelebrated. The service was also attended by representatives of non-Catholic churches.

In the evening, the forum was opened at the city theatre. The participants were greeted by Baroness Hilde Kieboom, who represented the Community of St. Egidio in Belgium, Mr Chris Peters, representative of Belgium’s government, Antwerp Mayor Bart De Vever, and Bishop Bonny. A message of greeting from Pope Francis of Rome was read out. This was followed by speeches of greeting from the founder of the Community of St. Egidio, Prof. Andrea Riccardi, and the president of the European Union, Herman Van Rompuy.

Among the speakers during the second part of the opening ceremony were Ms Vian Dakhil, member of the Iraqi Parliament from the Yazidi community, Syro-Jacobite Patriarch Ephraim II of Antioch and All the East, Rabbi Abraham Skorka, and Grand Mufti Ibrahim Abdel-Karim Allam of Egypt.

On September 8, the forum continued its work in issue sections.

On September 9, a closing ceremony will take place, the website of the St. Catherine Church in Rome reports.