A derelict village located eight hours northeast of Moscow by car hosts one of the 60 rehabilitation centers for drug addicts that the Russian Orthodox Church has opened since the early 1990s.

The parish of St. George is located in a remote village in Ivanovo Region. It is one of 60 drug rehabilitation centers in Russia run by the Russian Orthodox Church. Only 12 people live here – four priests and eight recovering drug addicts from Moscow, St. Petersburg, Novosibirsk and Tomsk. The center tries not to take addicts from nearby towns, in case they begin to think of escaping. 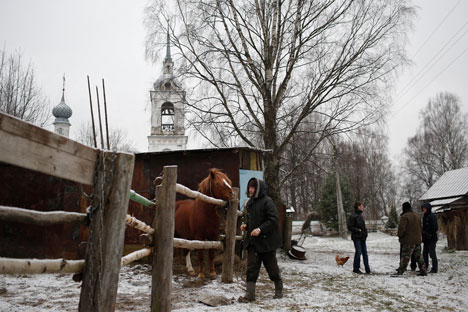 The village of St. George consists of a telephone box and a couple of buildings on a small hill. Only one or two buildings, perhaps, are inhabited; the rest stand with their roofs fallen in behind collapsing fences. The monastery grounds are spotless – neatly-trimmed strawberry bushes, garden tools tidily packed away, the greenhouse covered for winter, the paths swept and a horse exercising in the paddock. The farmyard is full of well-fed chickens and a sheep dog is keeping an eye on the enclosure. Nearby they are building a cowshed and, as soon as it is feasible, the priests are planning to buy cows.

Rosy-cheeked, burly and well-mannered young men move around the parish. Alexander is bursting with emotion as he holds a chicken in his arms; Anton describes the beautiful sunsets on the Volga River; Andrei remarks shyly about what joy there is in creative work, while the rough-and-ready Konstantin has one of Erich Maria Remarque’s books on his bedside table.

The “students”all have a similar history of substance abuse; they all started drinking and smoking around the age of 13, before experimenting with different “stuff” and becoming unexpectedly hooked… but they never considered themselves drug addicts.

The Rev. Mefody Kondratyev explains that the idea of getting involved in the rehabilitation of drug addicts arose out of desperation. In 1993, the priests took in an addict as a kind of experiment: they accommodated him in a separate building, provided him with an electric hot plate, and tried to keep mostly away from him, not knowing what might happen. Later, there were two addicts, but the priests tried to keep their distance from them, as before.

By the end of the 1990s, however, the priests had begun to realize that things had to be done differently, and over the years that followed they worked out the rehabilitation program they still use to this day.

The center’s residents say that it is not easy to be taken in here, on the banks of the Volga: they had to pass an interview and stay clean for at least 10 days before being accepted. Once taken in, residents sign an agreement that they will obey the clergy, attend church services and carry out their duties (various kinds of assignments).

The day begins with a church service for both the priests and their charges, after which there are some short morning exercises followed by breakfast. After breakfast and lunch, each of the residents gets on with their allotted tasks: for some this means chopping firewood, for others, bringing in hay, and still others clean the dormitories. Evening Service precedes supper. Saturdays and Sundays are rest days and, except for a short church service and their meals, the patients are free to do more or less as they please.

On Saturday evenings, everybody gets together to discuss the week’s results. Each of the parish clergy takes an hour to an hour-and-a-half to go through the previous week’s plan with the residents and assess their progress. On Sundays, the priests prepare the patients for a normal life, discussing different topics with them – how to receive guests, how to arrange a room. Then, after supper, they watch a film. Abbot Siluan chooses the films. The parish’s collection includes films by Tarkovsky and Zvyaginstev, along with Russian and foreign classics. On Monday evenings, the residents discuss the films they have seen with the priests.

The second stage is the spiritual component. The recovering addicts spend several months learning how to deal with their addiction through ascetic self-denial, learning the meaning of fasting, prayer, obedience and the holy sacraments.

The third stage is adaptation, which some also call the “half-way house.” The recovering addicts, without losing touch with their mentors, begin to establish a life outside the center – finding jobs, building social contacts and learning how to live in a drug-free world.

The average rehabilitation period in the parish is between a year and a year-and-a-half. No one is kept against their own will. Once residents feel they are able to live in a secular environment, they discuss it with a priest before leaving.

The priests of the St. George’s parish believe that the rehabilitation method they have developed for treating addiction is successful, although they are not rushing to translate that success into statistics. “We no longer bother keeping numbers,” says Mefody. He believes this is a thankless task, as dependency remains latent for life: one can never tell when someone might falter. This is why the former residents refer to themselves as “recovering,” instead of“recovered.”

Even so, Rev. Silvanus claims that more than half of their former patients remain “clean.”Those who slip back are not taken back at the parish: they set a bad example for the other inmates, and indulging them might derail the others.

First published in Russian in Gazeta.ru. 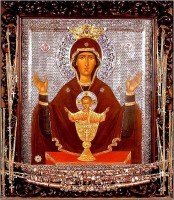 The Inexhaustible Cup: On Getting Help…
admin

On May 5/18, the Russian Orthodox Church honors the icon of the Mother of God known…

Most viewed articles
The Trap of Religiosity111
Patriarch Daniel explains why the Hesychasts were the most sought-after spiritual fathers and what is a prayerful reason91
Bishop Nicholas of Manhattan visits Holy Cross Monastery in West Virginia84
Lord, Save Me!73
Why Everything Is Important (but not the stuff you might imagine)61
Condolences of Patriarch Kirill over the death of believers in the fire that broke out in Abu-Seifein Church in Cairo45
25 Years of Help: the Ship-Church Goes On its 25th Voyage to Distant Villages42
St. Tikhon Church to host Liturgical Music Symposium in October 202240
Ukrainian Church Celebrates Metropolitan Onuphry’s 8th Anniversary of His Enthronement20
Most popular authors
Pravmir.com team231
Vasileios Stoyiannos111
Aurelian Iftimiu91
Fr. Theodore Stylianopoulos73
Archpriest Stephen Freeman61