Source: TeleSUR
Fidel thanked the religious leader for his important contribution to the strengthening of ties between Russia and Cuba.
Natalya Mihailova | 15 February 2016 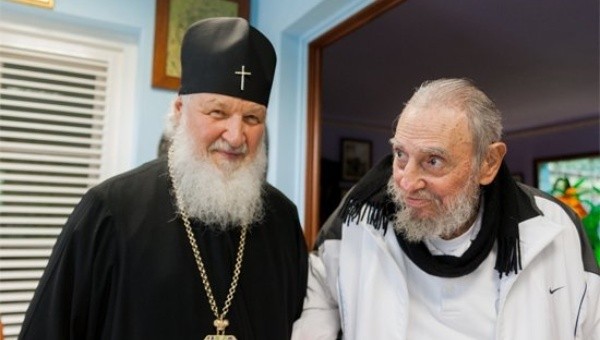 This is not Fidel’s first meeting with Patriarch Kirill. The two met each other in Havana in October 2008.

During the meeting Fidel thanked the religious leader for his important contribution to the strengthening of ties between Russia and Cuba.

Meanwhile the Patriarch thanked Castro for giving the green light for the construction of an Orthodox church in Havana while he was president, which Cuba’s Orthodox community has been using for years, Priest Alexander Volkov, Patriarch Kirill’s press secretary, said.

The Russian Orthodox Church is paying a visit to Cuba at the invitation of President Raul Castro, who last Friday met with Pope Francis in Havana, as the Catholic leader made a stop on the island before continuing his trip to Mexico.