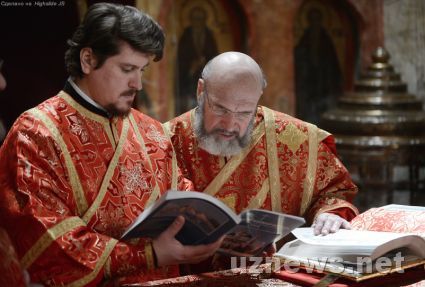 The Russian Orthodox Church is planning to publish the gospels in the Central Asian languages, including Uzbek and Tajik.

According to the Dimitry (Pershin), a priest on the missionary commission of the Moscow diocesan council, this publication will be well-researched, academic in nature, and of high quality.

“This will be our answer to the societal needs of labor migrants to culturally adapt and integrate. Our response is not an aggressive one. Instead it bears a certain linguistic and logical standard, which we can offer to those who come to our country,” said Dimitry.

According to the cleric, many people who arrive in the Russian capital in search of work come from very difficult walks of life. In order to feed their families and send money home they often work for twelve hours a day at construction sites, as street cleaners, or in the service sector. They live in poor conditions and cannot afford to pay for continuing education courses.

As a result they end up living in a sort of cultural bubble and continue to judge their new homeland and its people by stereotypes that they had acquired at home, continues the priest Dimitry.

Many people from Central Asian, says the cleric, believe that the Russian Orthodox church to be pagan since it believes in the Holy Trinity and reveres icons.

In his opinion, migrant workers should know about the Russian Orthodoxy and not fear or mistrust it but rather, as guests should, respect the hosts and the country receiving them.

On the other hand, Gejdar Jemal, the chair of the Islamic Committee of Russia, co-chair of All-Russian People’s movement Russian Islamic Heritage, and permanent member of Islamic-Arabic People’s Conference, does not believe this idea to be an entirely altruistic one from the Russian Orthodox Church.

“This is nothing but a missionary attempt,” told Uznews.net Jemal, “They simply want to use the often desperate situations of labor workers living in Russia in order to achieve their own gains.”

The Islamic Committee chair then adds that Christian holy texts have been translated in the past and more than once into various languages including Arabic.

They were translated into Uzbek and Tajik in the early 1980s.

Jemal is not sure whether the stated reason of educating the migrants is the real one; most likely the Russian Orthodox Church is trying to attract fresh converts into its faith.

The Moscow diocesan council points out that together with the Russian University for the Friendship of the Peoples it has organized a number of courses on the Russian language, legal basics, and Russian culture for Tajik migrants.

Furthermore they have held a number of networking meetings with members of the Central Asian communities and prepared flyers with useful information for migrants in Russian, Uzbek, Kyrgyz, and Tajik languages.