Russian Orthodox Church, Vatican ready to be mediators between conflict parties in Ukraine

Source: Interfax-religion
Natalya Mihailova | 22 October 2016
Moscow, October 21, Interfax - The Russian Orthodox Church and the Catholic Church have denied the possibility of supporting any of the parties to the military conflict in Ukraine. 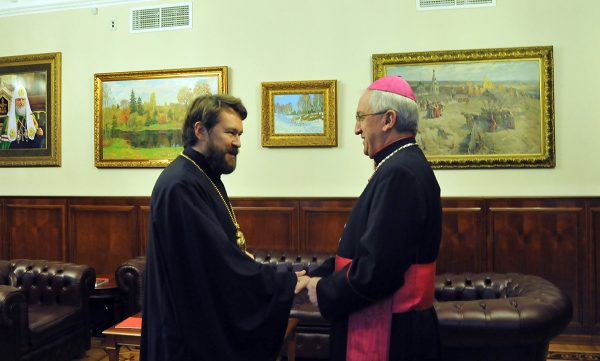 This issue was raised in the meeting between Metropolitan of Volokolamsk Hilarion, the head of the Synodal Department for External Church Relations, and Archbishop Celestino Migliore, Apostolic Nuncio to Russia, the communication service of the synodal department said.

“They agreed that the Churches should act as peace mediators between the conflicting sides rather than side with a particular party to the conflict,” the report said.

During the meeting, Metropolitan Hilarion expressed appreciation of the well-considered stance taken by Pope Francis and the Vatican on the situation in Ukraine.