Patriarch Kirill of Moscow and All Russia has expressed his support to Cypriots and Greeks suffering following the economic crisis on the island. 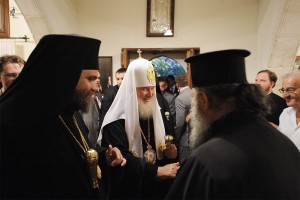 Patriarch Kirill during his visit to Cyprus, 2012. Picture by K. Novotarsky

During the annual dinner the Patriarch hosts on the Sunday of orthodoxy at the Greek Embassy in Moscow, he said “it hurts to see thousands of our Cypriot brothers being hostage of the collapse of banking sector and having to accept the proposals of international financial institutions for financial assistance|.

The Central Bank announced late Monday its decision to extend a bank holiday on Tuesday and Wednesday following a decision taken by the Eurogroup to resolve the Cyprus Popular Bank whose good part will be folded in Bank of Cyprus. The latter will be recapitalized through a deposit/equity conversion.

Excluded from the international markets, Cyprus applied last June for financial assistance from the EU bailout mechanism, after its two largest banks sought state following massive write down of the Greek bonds holdings amounting to 4.5 billion euros. In a decision early Monday morning, the Eurogroup announced it would provide a financial assistance package amounting to 10 billion.

Most viewed articles
Patriarch Daniel explains why the Hesychasts were the most sought-after spiritual fathers and what is a prayerful reason142
The Trap of Religiosity121
Bishop Nicholas of Manhattan visits Holy Cross Monastery in West Virginia87
Why Everything Is Important (but not the stuff you might imagine)82
Condolences of Patriarch Kirill over the death of believers in the fire that broke out in Abu-Seifein Church in Cairo51
25 Years of Help: the Ship-Church Goes On its 25th Voyage to Distant Villages51
St. Tikhon Church to host Liturgical Music Symposium in October 202245
The Transfiguration – Glory and Sacrifice28
Ukrainian Church Celebrates Metropolitan Onuphry’s 8th Anniversary of His Enthronement25
Most popular authors
Pravmir.com team259
Aurelian Iftimiu142
Vasileios Stoyiannos121
Archpriest Stephen Freeman82
Priest Luke A. Veronis28