Source: Interfax-religion.com
Natalya Mihailova | 17 November 2014
Belgrade, November 17, Interfax - Patriarch Kirill of Moscow and All Russia and Patriarch Irinej of Serbia conducted a liturgy in the Church of Saint Sava in Belgrade on Sunday. 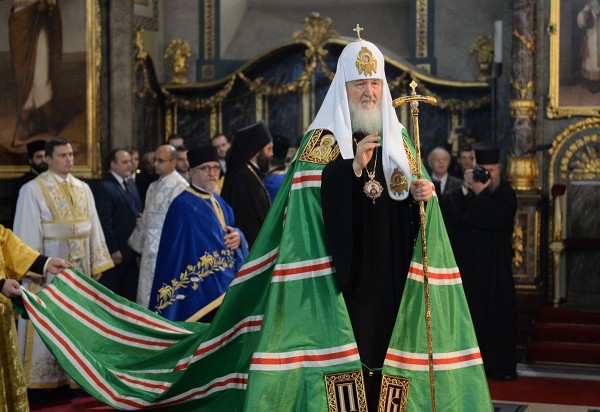 The church service drew over 10,000 people, among them Serbian President Tomislav Nikolic and Foreign Minister Ivica Dacic. The church was not large enough to take in all believers and many prayed outside.

“Think how many storms have swept across the long-suffering land of Serbia! It has gone through two world wars, the horrible genocide of the Orthodox Serbian population – unprecedented in its cruelty – and the hard times of sacrilege. It was also destined to go through the horrors of new wars, bomb strikes, and desecration and destruction of the holy shrines,” Patriarch Kirill said after the liturgy.

“But each new trial that befell the Serbs would only strengthen their faith,” he said.

“The people being guided by the Russian and Serbian Orthodox Churches have been professing their common faith in unison and with one heart, sharing the joy and helping each other in grief,” the Russian patriarch said.

Patriarch Kirill presented the church with part of the relics of St. Alexander of the Neva, urging the Serbs to cherish the faith and spiritual unity with the Russian people.

Patriarch Irinej in turn presented the Russian patriarch with an Order of Saint Sava, first degree.

The Byzantine-style cathedral was erected where the relics of Saint Sava were burnt by the Ottoman Empire in 1594. The foundation was laid in the early 20th century, but the construction resumed in the late 1990s.

On April 20 1999, when Belgrade was being bombed by NATO warplanes, Patriarch Alexy II of Moscow and All Russia and Patriarch Pavle of Serbia conducted a liturgy in this cathedral. A four-meter high carved wooden cross from Russia, made on the money donated by the Serbian community in Moscow, was handed to the church in 2008 with the blessing from Alexy II.

The church can accommodate up to 10,000 people. Its two belfries have 49 bells weighing from 12 kilograms to 5 tonnes.

The icon stand and the lower part of the walls and columns are made of valuable kinds of marble. The remaining surface of the walls is to be covered with mosaics.

A competition of mosaic projects for the Church of Saint Savva was held in Moscow by the Russian Academy of Arts in October 2014. An international jury selected two projects: the first one proposed by the Moscow International Foundation for Assisting UNESCO, led by academicians of the Russian Academy of Arts, and the second one by the wall painting studios of the Saint Elizabeth Convent in Minsk .

The first project is to be launched first to be joined by the authors of the second project.

Most viewed articles
Patriarch Daniel explains why the Hesychasts were the most sought-after spiritual fathers and what is a prayerful reason162
The Trap of Religiosity132
Why Everything Is Important (but not the stuff you might imagine)95
25 Years of Help: the Ship-Church Goes On its 25th Voyage to Distant Villages53
The Transfiguration – Glory and Sacrifice47
St. Tikhon Church to host Liturgical Music Symposium in October 202246
Ukrainian Church Celebrates Metropolitan Onuphry’s 8th Anniversary of His Enthronement27
Patriarch Daniel urges Romanians worldwide to value and cultivate prayer17
Most popular authors
Aurelian Iftimiu179
Vasileios Stoyiannos132
Pravmir.com team126
Archpriest Stephen Freeman95
Priest Luke A. Veronis47