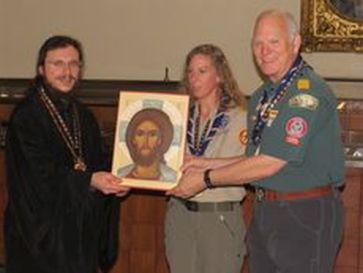 The ceremony was held in New York where the 5th World Scout Interreligious Forum is held these days.

Member of the national council of the All-Russian Scout Association, deputy head of the Brotherhood of Orthodox Pathfinders Hieromonk Dimitry Pershin gave the present to national commissioner of the American Boy Scouts Charles W. Dahlquist to “mark many centuries of friendship rooted in biblical values and focused on the future,” the priest told Interfax-Religion.

The Russian Brotherhood of Orthodox Pathfinders unites Orthodox scouts of the All-Russian Scout Association and is a structure of the Synodal Youth Department.