Source: Interfax-religion
Natalya Mihailova | 22 July 2016
Kazan, July 22, Interfax - Patriarch Kirill of Moscow and All Russia and the chairman of the Spiritual Muslim Board of Tatarstan Mufti Kamil Samigullin have discussed the development prospects of cooperation between the Orthodox Christians and the Muslims. 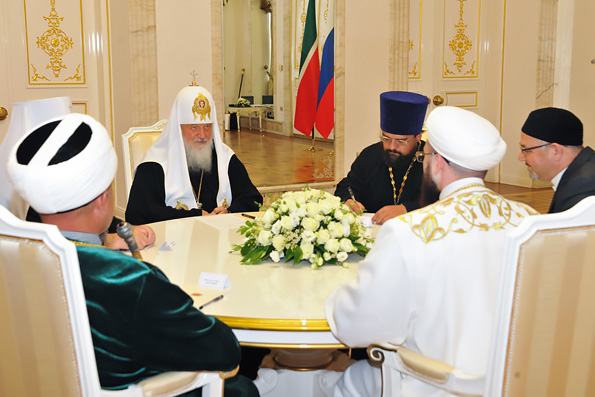 Kazan, July 22, Interfax – Patriarch Kirill of Moscow and All Russia and the chairman of the Spiritual Muslim Board of Tatarstan Mufti Kamil Samigullin have discussed the development prospects of cooperation between the Orthodox Christians and the Muslims.

The mufti told the patriarch that he actively cooperates with the local diocese, which results in implementation of the joint projects. “We value that we all live in one ‘house’, albeit in different ‘apartments’, in one of them there are icons, in another there are Muslim symbols. We all are protecting the common human values together; we all listen to each other,” he said.

He said “many Muslims enjoy watching the TV program, which is hosted by Patriarch Kirill. The mufti considers this TV program as an example of how one can explain the common human values in layman’s terms.

The patriarch noted that he is glad to see such a young and energetic mufti. “I believe, today there are very strong global, not only national, preconditions for the development of relations between the Orthodox Christians and the Muslims. We belong to one Eastern culture, even our attires are similar,” he said.

However, he said that the East turned out to be less receptive to innovations of various kinds in the religious life.

Under this influence the destruction of the Christianity is happening, he said. “We understand that the destruction is happening not in a dogmatic, theological sense, but in the field of morals,” he said, making example of several Protestant communities allowing to perform same-sex “marriage” ceremonies.

The patriarch believes that this may lead to increase of tensions in the relations between the Muslims and “the so-called Christians.” “When the devout Muslims see what is happening, they do not accept many things. When there is no common basis, it is very difficult,” the patriarch said.

“The advantage of Russia is that we have common moral standings, both the Orthodox Christians and the Muslims. In this aspect, I believe, it is very important for us to work together in strengthening of morals in the life of our community,” he said. He noted that there are not essential contradictions between two traditions on the issues of morals.

Most viewed articles
Of Boasting and Modesty103
His Holiness Patriarch Kirill Contracted the Coronavirus101
4th Plenary Session between ROC and Coptic Church Held85
What Does the Cross Mean for us Today?40
Most popular authors
Pravmir.com team186
Archpriest Basil Ross Aden103
Priest Robert Miclean40