Sacred Objects from the Serbian Monastery of Chilandar on Mount Athos Have Arrived in St. Petersburg

Source: Pravmir.ru
This even is dedicated to the 100th anniversary of the First World War.
Natalya Mihailova | 03 June 2014 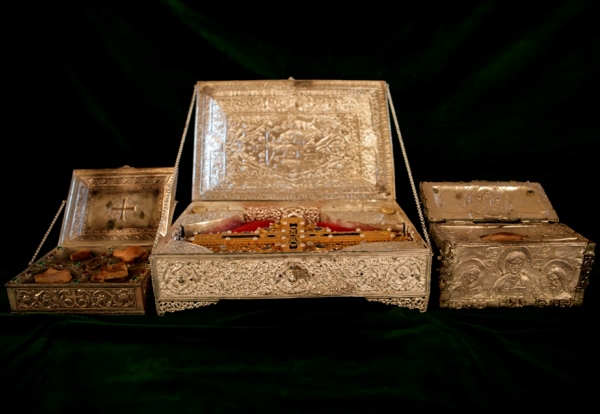 PRAVMIR. The relics of Serbian saints and a part of the Holy Cross from the Serbian monastery of Chilandar (Mount Athos) will stay at the Novodevichy Convent of St. Petersburg from June 2-4.

In between services, molebens will be served before the sacred objects, relates the news agency “Life-giving Water.”

The Serbian sacred objects have been brought to St. Petersburg in honor of the 100th anniversary of the First World War, which united the Serbian and Russian people. Organizers of the event are the Charitable Foundation “Mt. Athos Offering” and the brotherhood called “Sons of Mt. Athos.” The purpose of their activities is to unite Orthodox Christians, regardless of ethnicity, nationality, political opinion, and national borders.

Earlier the sacred objects could be venerated in the city of Vladimir.

Most viewed articles
Maronite Patriarch Thanks Russian Patriarch for His Support for Christians in the Middle East100
Athens and Jerusalem: the Role of Philosophy in Faith, with Analysis by St. Gregory Palamas83
Food for the Journey82
The pandemic is a significant examination for us all, Transylvania Metropolitan says67
Fire Destroys Main Building with the Church of St. Peter Convent in Pavlodar63
Orthodox Priest Rescues Two People from Fire in Constanța54
We Are Not Saint Mary of Egypt (But We Can Still Repent)36
Most popular authors
Pravmir.com team167
Aurelian Iftimiu121
Eric Hyde83
Dcn. Michael Schlaack82
Archpriest Geoffrey Korz36