Metropolitan Tikhon of All America and Canada | 18 January 2013 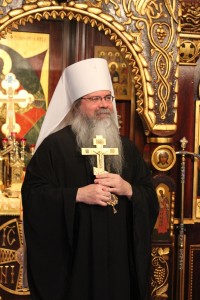 To the Hierarchs, Clergy, Monastics, and Faithful of the Orthodox Church in America

Dearly Beloved in the Lord:

As we make our way into the civil New Year, we continue to grieve over the tragic loss of the innocent lives at the Sandy Hook Elementary School. Those directly affected by this most recent act of violence, as well as those who have suffered through the many other examples of inhuman brutality during the past year, undoubtedly will require a long period during which they can find healing for their broken hearts and answers to their questions concerning the providence of God and the goodness of humanity.

Our society is increasingly weary of the sting of death and human sin and wary of the proclamations of hope and life coming from religious circles. Young people, unconvinced by shallow theology and hypocritical sermonizing, are increasingly identifying themselves as unbelievers, atheists, questioners or simply confused. People of all ages are losing faith or becoming critical of it, in part because they do not seem to find a satisfactory Christian response to tragedies such as the Newtown and Aurora massacres.

As Orthodox Christians, we too dwell under the shadow cast by every assault on the sanctity of human life, whether it be against the unborn, the infirm, the terminally ill, the condemned, or innocent school children. We, too, wrestle with the same questions with which society wrestles, since every one of us faces the same reality of death. But unlike those who have no hope, we know that, just when death seems to have gained the victory, life blossoms forth, as seen most clearly in Christ’s arising from the tomb on the third day.

The same paschal confirmation of death being swallowed up by life is revealed in our most recent celebration of the feasts of the Nativity and Theophany of Christ. The months of December and January are the richest in commemorations of some of the most venerable saints of the Church: Prophets and Ancestors who pave the way for the birth of the Savior and Hierarchs, Confessors and Monastics who shine with the glory that was revealed at His baptism. But no less proclaimers of His glory and His life are the martyrs, including those little ones who suffered incomprehensibly—the Holy Innocents.

We proclaim, as Orthodox Christians, that all life is a participation in and reflection of the One Who is Life Itself. And we do so, even in the midst of the insanity of this world, knowing that human passions and human sin may cause destruction in our communities. But Christ Himself, by His example of voluntary suffering, reminds us that we have our part to play in proclaiming life. If we are to transform the collective heart and mind of our society, we must begin by transforming our own hearts and minds.

Heeding the Gospel, let us remain faithful to the vision of human life as a sacred gift, recommitting ourselves to defending the lives “of all mankind,” as we pray at every Divine Liturgy. And let us commit ourselves to bearing witness to the life of Christ in all we do, say and think, so that even in small ways, we might proclaim the glory of the Kingdom not yet fully revealed, but already fully present in our midst.

+TIKHON
Archbishop of Washington
Metropolitan of All America and Canada