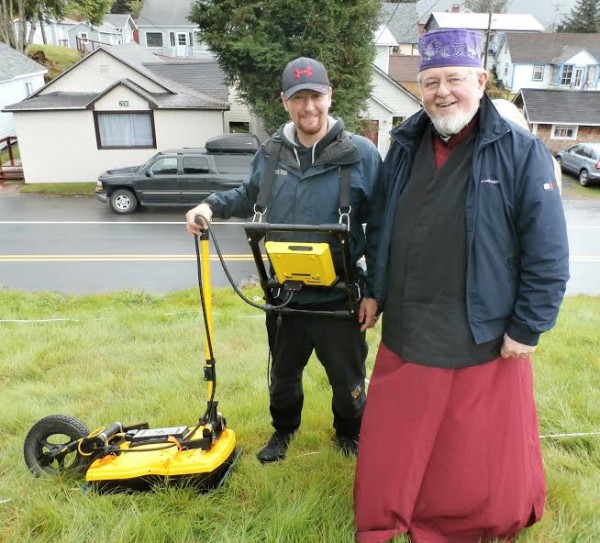 “I was informed that plans included redoing the area known as Block House Hill, modifying it to reflect more accurately its appearance during Russian colonial times,” Bishop David said.  “The discussion raised the possibility of locating the grave of Saint Jacob Netsvetov.  We knew that he had been interred in the vicinity, but the exact location remained a mystery.”

In discussing the matter with the NPS Superintendent, Mary Miller—whose father, coincidentally, had served as the cantor and choir director at Sitka’s Saint Michael Cathedral many years ago—Bishop David brought up the possibility of enshrining Saint Jacob’s relics, should they be recovered, in the landmark church.

“Mary brought up the use of a machine known as a ‘ground penetrating radar’ device,” said Bishop David.  “It was hoped that, with this device, we would be able to ascertain the exact location of Saint Jacob’s grave.”

The Block House was the site of a church that in part separated the Native Alaskan settlement from the Russian village, Bishop David explained, adding that it was believed that Saint Jacob had been buried near the church’s entrance.

During the last week of August, Dr. Thomas Urban of Cornell University arrived in Sitka with the high tech device which in recent months he had used to assist various other archaeological teams around the world.

“Helping Dr. Urban were Ms. Miller; Andrew Tremayne, NPS staff member; Dr. Brinnen Canter, Sitka NPS; and NPS volunteers James Sparks and Kelsey Brunasso,” said Bishop David.  “We now await data that will help us to solve this mystery, and we pray that, with the use of this technology, Saint Jacob’s relics will finally be found, perhaps in time for the January 2016 commemoration of the 50th anniversary of the tragic fire that engulfed Saint Michael Cathedral or the 150th anniversary of the transfer of Alaska from Russia to the US—‘Alaska Day’—on October 18, 2017.

Born on Atka Island in 1802, the son of a Russian father and Aleut mother, Saint Jacob was Orthodox Christianity’s first North American-born priest.  His tireless missionary efforts brought about the conversion of many across Alaska’s Yukon River region.  He fell asleep in the Lord in 1864.

While in Sitka, Bishop David also assessed the severe damage to the cathedral basement as a result of the torrential rains that befell Sitka in mid-August.