Source: DECR
Natalya Mihailova | 10 April 2014
The meeting was held at the DECR premises on April 8, 2014, under the chairmanship of Metropolitan Hilarion of Volokolamsk, chairman of the Moscow Patriarchate’s Department for External Church Relations (DECR) and Prof. Dr. Mehmet Paçaci, head of the Foreign Relations Department of the Presidency of Religious Affairs of the Republic of Turkey, usually referred to as Diyanet. 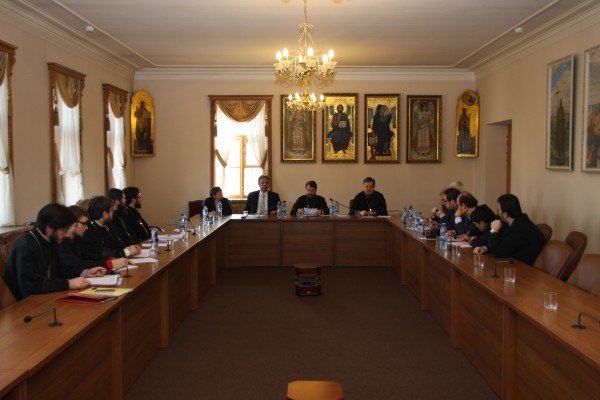 Taking part in the meeting on behalf of the Russian Orthodox Church were the Very Revd. Vsevolod Chaplin; chairman of the Department for Church-Society Relations; the Very Revd. Nikolai Balashov and archimandrite Philaret (Bulekov); vice-chairmen of the DECR; the Revd. Sergy Zvonarev, DECR secretary for far abroad countries; hieromonk Ioann (Kopeikin), prorector of the Ss Cyril and Methodius Institute for Post-Graduate Studies; the Revd. Dimitry Safonov, head of the DECR sector of inter-religious contacts; the Revd. Mikhail Asmus of the DECR secretariat for inter-Orthodox relations; and Ms Ulchenko, head of the Turkish sector of the Institute of Oriental Studies, Russian Academy of Sciences.

He Turkish side was represented by Dr. Hüseyin Yilmaz, director of the interconfessional and inter-cultural relations department of the Diyanet; Dr. Hakan Olgun, faculty of religious studies, University of Istanbul; Mr. Mr. Ömer Faruk Savuran and Mr. Şevki Isot of the Diyanet, and also Mr. Sağlik and Mr. Dilmaç, counsellors of the Turkish Embassy to Russia.

Metropolitan Hilarion delivered a report at the opening session on ‘The Situation of Religious Minorities in the World’ followed by a discussion during which the participants exchanged opinions on the threats of terrorism and extremism and on the measures for the protection of religious minorities and measures for the prevention of conflicts occurring on religious grounds.

Prof. Dr. Mehmet Paçaci spoke about historical aspects of relations among religions in the Republic of Turkey.

Archpriest Vsevolod Chaplin told the participants about inter-religious and inter-Christian cooperation in Russia and the CIS countries, noting the unique nature of this model of interaction between communities of traditional religions. He underscored a special role which the Interreligious Council of Russia plays in the strengthening of interreligious cooperation in the country.

Ms Ulchenko presented a report on ‘An Interreligious Dialogue in the Ottoman Empire and its Role in the Relations between Russia and Turkey.’

Prospects of the development of dialogue were discussed, such as exchange of faculty and students of theological schools, for instance, the University of Istanbul and the Ss Cyril and Methodius Institute of Post-Graduate Studies, and other kinds of cooperation in academic projects.