Seeing Your God Face to Face: Reflections on the Feast of the Nativity of Christ 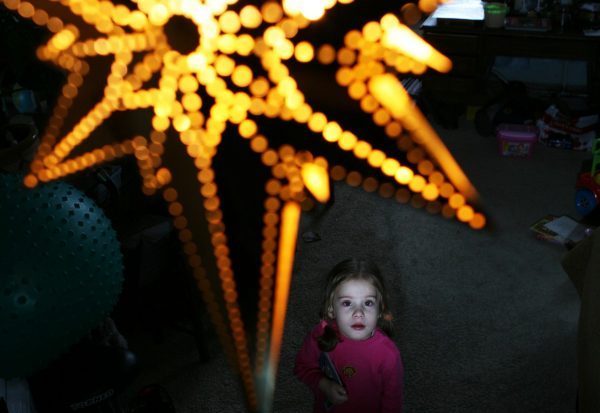 A few years back I was sitting with my son Matthew, cuddling before bedtime. As all parents know, that’s the hour when kids come up with their most philosophical questions. And true to form, Matthew asked me, as we were cuddling together in his darkened room, “How come when we pray and ask God to do things for us, God doesn’t say ‘I will’? Why can’t we hear God talk to us?”

That’s a very good question—one that perhaps has crossed the minds of all of us at one time or another. And there is an answer. And on this holiday for children, I would like to answer that question of a child, even if the child himself won’t understand the answer.

You see, Matthew, God used to say “I will” to people; they used to hear him with their own ears, long, long ago. If you read the Bible from the beginning to the end, you learn that God used to talk with people and walk with people, in just the same way that you and I walk and talk with each other.

It’s quite clear from the book of Genesis, that when God first appeared to human beings, He was seen by them looking for all the world like one of us. Adam walked with God in the Garden of Eden in the cool of the day, the Bible says. Adam and Eve talked with God, they saw Him, they heard His voice. He was on the most familiar terms possible with them.

But they didn’t appreciate this gift. They didn’t take God’s company seriously. And they disobeyed God, and so they lost the privilege of being with Him so closely all the time, of seeing Him face to face. This is what banishment from Paradise means, for them, and for us their greatgreat-great-grandchildren.

But God still spoke with people from time to time. They heard His voice. Sometimes they saw Him. As the new icon of the Holy Trinity on our iconostasis proclaims, Abraham and Sarah saw God and talked with Him and even fed Him. They saw Him in the form of three angels—that is to say, looking like three normal human beings, but there was something about their presence and personality that led Abraham to recognize that he was dealing, not with ordinary men, but with supernatural beings.

And Abraham’s grandson Jacob even wrestled with God once—again, with God appearing in the form of an angel—looking like a man, but something more than a man. And Jacob said, “I have seen God face to face, and yet my life is preserved.” He knew, in other words, that seeing God was a now a special thing for imperfect people, for sinners. And after him, Moses, and seventy elders of the Israelites, saw God on Mount Sinai (Exodus 24:11), and ate and drank before Him in a meal of covenant fellowship. And God spoke with Moses, and with Jacob before him, and with Abraham before him, and He made them many wonderful promises, and gave them commandments and instructions for their own good.

But, once again, God’s people did not take Him seriously, even though He let Himself be seen by their very own eyes in a form that was awe-inspiring, yet still human. They forgot His promises, they neglected His commandments. And so God told His people that no more would He appear to them face to face, as He appeared to Moses (Numbers 12:6-8); but that in the future, He would appear to His prophets only in dreams and visions, only in miraculous signs and wonders—in ways, that is, designed really to get our attention.

And God was true to His word. Still He appeared to His people, but now in frightening, unfamiliar ways—fire from heaven, earthquakes, mighty winds, storm clouds, lightning and thunder. Still He responded to His people’s prayers, not directly, but as if through a game of Telephone, as if through forwarded emails, and only through His anointed prophets, and to them only through visions and dreams of the night, never face to face. He spoke less and less often, and each time with greater force and fanfare. Until finally He appeared to the prophets in forms that made them faint dead away from terror, as happened to righteous men like Daniel and Ezekiel—manifesting Himself in forms that human language cannot describe. But still His people did not pay attention, still they did not take Him seriously.

And so, for hundreds of years, God fell silent. He anointed no prophets. He spoke no revelations. He appeared in no form or manifestation whatsoever. Nothing seemed to work. As often as He said, “I will” to His people, they forget His promises and His answers to their prayers. And even His silence made little impression on them.

Until finally, one dark night, in a lonely little village called Bethlehem, in a part of the world that time and progress had forgotten, God gave it one more try. This night, He opted to give the face-to-face approach another chance. Not by a dazzling array of heavenly pyrotechnics. Not in the form of a fearsome angel. Not in the form of a mighty man. But in the form of a child—a baby, a newborn infant. Meek and mild, weak and lowly, He came and appeared once more, so that this time we would take Him seriously.

We call Jesus Christ “the Word of God.” And beyond all the philosophical dissertations and theological treatises on what that name signifies, it means before all is that Jesus Christ is God’s answer . . . His way of saying out loud “I will” to the prayers of every little boy, and every little girl, and every big boy and girl in the world. Or Saint Paul puts it in Second Corinthians 1:20: In Christ Jesus, the Son of God, “every promise of God is Yea and is Amen.”

For what need most of all, what we have lacked since the day Adam and Eve were expelled from the Garden, is to see our God, face to face, as we were created to enjoy Him. And this gift of Paradise was restored on the first Christmas in the manger of the stable of Bethlehem. Go to the new icon of the Nativity in the sanctuary, look in the manger and see your God, trying once more to tell you, personally, face to face, that He loves you, that He wants the best for you, that He is ready to give you whatever you need to prepare you for an everlasting life with Him. “For this is the will of my Father,” Jesus Christ said (John 6:40), “that every one who sees the Son and believes in Him should eternal life, and I will raise him up at the last day.”

The Drug That You Watch

I find nursing homes depressing, and I’m sure I’m not the only one. I wonder, though, if others…

‘Prune’ Juice: Why Do Bad Things Happen to Good People?

Many are asking this nowadays. Why must a successful businessman of 20 years close up shop? Why do…