Source: OCA
Natalya Mihailova | 14 September 2017
Orthodox Christian hierarchs, clergy and faithful from across the upper Midwest will gather at Lane Tech Auditorium here at 10:00 a.m. on Saturday, September 30, 2017 for the celebration of the Hierarchical Divine Liturgy marking the 125th Anniversary of Orthodox Christianity in Chicago. 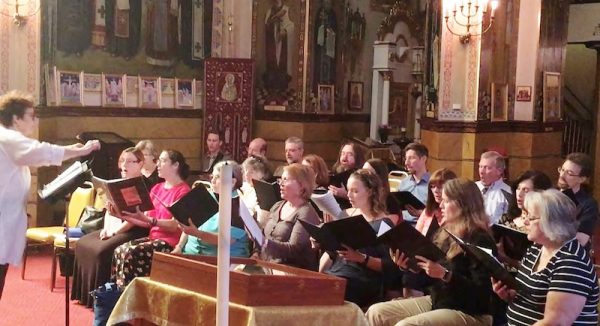 His Grace, Bishop Paul of Chicago and the Midwest will be among the concelebrants, while His Grace, Bishop Irinej [Dobrijevic] of the Serbian Orthodox Diocese of Eastern America will deliver the homily.

A native of Cleveland, OH, Bishop Irinej is well acquainted with Orthodoxy in the upper Midwest.  A graduate of Saint Tikhon’s Seminary, South Canaan, PA and Saint Vladimir’s Seminary, Yonkers, NY, he served as the Director of Education at Chicago’s Holy Resurrection Serbian Orthodox Cathedral prior to his ordination to the priesthood and consecration to the episcopacy.  He also lectured at Loyola University in Chicago, and for many years served as co-editor of The Path of Orthodoxy, the official publication of the Serbian Orthodox Church in the USA and Canada.  Ordained to the diaconate at Holy Resurrection Cathedral, Chicago, on January 15, 1994, he was tonsured to monastic rank at Saint Sava Monastery, Libertyville, IL on January 18, 1995 and ordained to the priesthood nine days later at Saint Sava Cathedral, Parma, OH.  On June 18, 2006, he was elevated to the dignity of Archimandrite.  On July 15 of the same year, he was consecrated to the episcopacy in Belgrade, and on October 21 he was enthroned as Bishop of the Serbian Orthodox Diocese of Australia and New Zealand.  On May 25, 2016, the Holy Assembly of Bishops of the Serbian Orthodox Church elected him by acclamation to the Throne of Bishops of Eastern America, succeeding His Grace, Bishop Mitrophan.

The Pan-Orthodox Choir of Greater Chicago will sing the responses at the historic Liturgy, which is being sponsored by the Orthodox Christian Clergy Association of Greater Chicago [OCCA].  Father Nicholas Dahdal, Pastor of Saint George Antiochian Orthodox Church, Cicero, IL, serves as the celebration’s Chairman, assisted by Gordana Trbuhovich.

An Anniversary Banquet will follow the Liturgy at 2:30 p.m. at the Chicago Marriott O’Hare.

The Orthodox Christian presence in Chicago formally began in the late 1800s with the establishment of the “Greco Slavonic Brotherhood,” which included immigrants primarily from Sparta and Corfu, Greece; Montenegro and Hercegovina, in Serbia; and Carpatho-Russians and Galicians from what was then the Austro-Hungarian Empire.  After petitioning the ecclesiastical centers in their respective homelands, priests were sent in 1892 to serve the faithful under the existing Russian Orthodox Diocese of Alaska.  This marked the establishment of Saint Vladimir Church [now Holy Trinity OCA Cathedral, built during the pastorate of Saint John Kochurov and consecrated by Saint Patriarch Tikhon], Annunciation Greek Orthodox Church, and Holy Resurrection Serbian Orthodox Church.  Today, there are nearly 80 parishes in the greater Chicagoland area.

“A Pan-Orthodox committee representing 20 parishes is working on producing this grand event,” said Ms. Trbuhovich.  “We welcome additional volunteers, and especially singers for the choir.”

Additional information may be obtained by contacting 125orthodoxchicago@gmail.com or by calling Father Nicholas Dahdal at 708-656-2927 or Gordana Trbuhovich at 773-619-8755.  On-line updates will be available through September 30.