Source: B92.NET
Natalya Mihailova | 14 August 2014
In a statement released late on Tuesday on the website of the Serbian Orthodox Church, Bishop Irinej of Bačka denies patriarch was invited to Vatican. 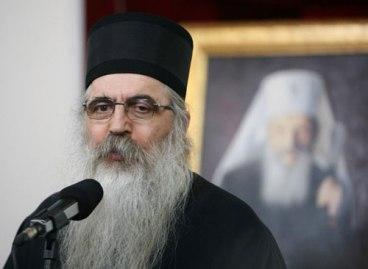 BELGRADE — A spokesman for the Serbian Orthodox Church has denied that Serbian Patriarch Irinej was invited to visit the Vatican and meet with the Catholic pope.
In a statement released late on Tuesday on the website of the Serbian Orthodox Church, Bishop Irinej of Bačka said this topic was publicly discussed “only because (Catholic) Bishop of Zrenjanin Ladislav Nemet in his statement for the Novi Sad daily Dnevnik misrepresented a meeting between a delegation of the SPC and Archbishop Dominique Mamberti, the Vatican secretary for relations with other countries.”

Bishop Irinej said that Mamberti was invited to Serbia by the state leadership, and that, “as a sign of respect towards the majority (Orthodox) Church and its head, the program of Mamberti’s visit included a courtesy encounter with Serbian Patriarch Irinej and the Holy Synod, on June 30, at the Patriarchate in Belgrade.”

“In a friendly informal discussion, both sides emphasized the need for further improvement of relations and cooperation between the two churches. They also discussed the need and usefulness of bilateral meetings on high and highest levels, but the secretary of the Holy See did not deliver any historic invitation from Pope Francis to the patriarch and members of the Holy Synod to visit the Vatican,” said the SPC bishop.

He added that “only the bishop of Zrenjanin knows how it is that Patriarch Irinej and members of the Holy Synod agreed to visit the Vatican – and what kind of diplomatic negotiations on ways to organize this visit” are now ongoing – something that Nemet also spoke about.

According to Bishop Irinej, Nemet has consistently demonstrated “his obsessive need to deal with the SPC and lecture it.”

He added that the likely real purpose of Nemet’s “excurse” was to inflict yet another insult to the SPC, its leader and the entire Serb nation – “by comparing us to kindergarten children that do everything out of spite.”

“In any case, dialogue and cooperation among the churches will not be called into question because of sensationalist public statements of Bishop Nemet, that are counterproductive exactly to what he verbally and formally stands for. At the same time, he is obviously not aware of the danger of excluding himself for a long time, perhaps permanently, from the dialogue that is ongoing despite the many challenges and obstacles,”said the bishop of Bačka.

Most viewed articles
We Are Not Saint Mary of Egypt (But We Can Still Repent)198
Orthodox Priest Rescues Two People from Fire in Constanța131
Dining with Caesar131
Athens and Jerusalem: the Role of Philosophy in Faith, with Analysis by St. Gregory Palamas120
Archbishop of Australia Attends Commemorative Events for Battle of Crete in Melbourne31
What Does Asceticism Look Like?1
Most popular authors
Archpriest Geoffrey Korz198
Aurelian Iftimiu131
Archpriest Lawrence Farley131
Eric Hyde120
Pravmir.com team30
Maria Trushanina1
Archpriest Michael Gillis1