Serbian Hierarch: For 300 Years, There Was One Church, and Now Everything Has Changed 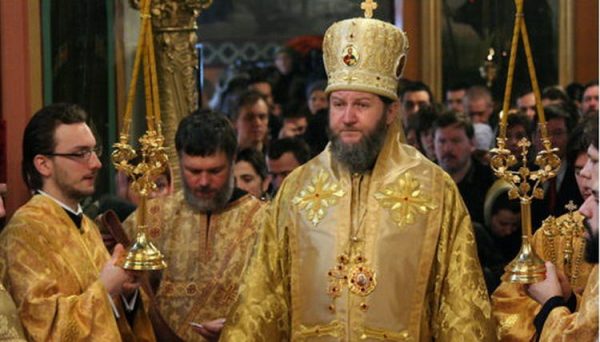 His Grace Bishop Antonij of Moravic (Serbian Orthodox Church) and His Eminence Archbishop Mikhail of Prague and the Czech Lands visited Ukraine on November 23-24, 2018, as reported by Vzdz.church.ua.

As part of their visit, they traveled to Odessa, where they had a fraternal meeting with His Eminence Metropolitan Agafangel of Odessa and Izmailsk.

Bishop Antonij joined Metropolitan Agafangel in performing an akathist before the miracle-working Kasperov Icon of the Mother of God in Odessa’s Uspensky Monastery. After the service, the representative of the Serbian Orthodox Church granted an interview to the Odessa Diocesan Press Office, noting:

“The Church of God is a Divine-human organism which consists of the Local [National] Orthodox Churches. As a human organism, it consist of individual members, just as the Church consists of Local and autocephalous Churches. If one member is suffering, the entire body is ill. If one Church is suffering, the Local Churches cannot remain indifferent. Naturally, we all turn to prayer and do all we can to heal these problems. This is especially the case in Ukraine, where they are trying to divide the united Orthodox Church.

“The Serbian Orthodox Church as represented by its Council of Bishops, which convened on November 6-8 of this year, adopted a very precise decision that only the canonical Ukrainian Orthodox Church under the omophorion of His Beatitude Metropolitan Onouphry of Kiev and All Ukraine would be recognized, Серand that there would be no recognition of and concelebration with the schismatic organizations headed by Mikhail Denisenko and so-called “Metropolitan” Makary (Maletich).

“We don’t understand: for 300 years, there was one Church, and now everything has changed. This is a canonical violation which destroys Church traditions. Secondly, the granting of a Tomos of autocephaly cannot be done by a single Orthodox Church but only by consensus of all the Local Orthodox Churches. They were not consulted on this matter and most of them disagree with the decision of the Constantinople Patriarchate.”

Archbishop Mikhail responded by saying that the goal of his visit was to “share the joy of divine service,” to express empathy with the ecclesiastical situation in Ukraineand witness their unity with the Ukrainian Orthodox Church.

His Eminence recalled the history of Orthodoxy in Czechia. He said that when St Cyril, Equal-to-the-Apostles, brough the good news of the Gospel to the Czech Lands, only the Roman pope recognized the autonomy of the Slavic peoples occupying the region, while another pope retracted it, behaving in the same way as the Patriarch of Constantinople. Archbishop Mikhail noted that “this is unacceptable behavior.”

“We are very sympathetic and explain to our people that we all, Czechs, Slovaks, Trans-Carpathians, and even Orthodox Christian Germans, must behave as one family. Your joys are our joys, your sorrows are ours. We must support each other in word and in prayer. During every one of our Liturgies, prayers are read for peace in Ukraine and for the unity of the Church. We will continue to pray and pray and pray. Prayer is the most important thing.”