Metropolitan Hilarion: “We Did Not Close Doors to the Dialogue with Constantinople” 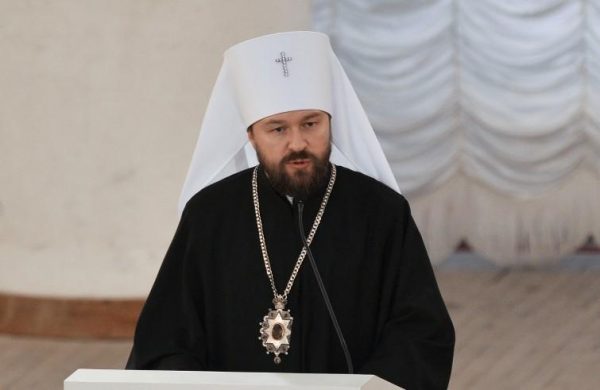 – Can you tell us in which atmosphere and with what sentiments the Holy Synod in Minsk made the decision to break the Eucharistic communication with Constantinople?

– The Statement issued by the Holy Synod of the Russian Orthodox Church on October 15, reads: “To admit into communion schismatics and a person anathematized in other Local Church with all the ‘bishops’ and ‘clergy’ consecrated by them, the encroachment on somebody else’s canonical regions, the attempt to abandon its own historical decisions and commitments – all this leads the Patriarchate of Constantinople beyond the canonical space and, to our great grief, makes it impossible for us to continue the Eucharistic communion with its hierarchs, clergy and laity.” The aforementioned “great grief” is not just a figure of speech: it was a very hard decision, but, regrettably, the latest steps taken by Constantinople left us no other choice.

We had not closed doors to the dialogue. In late August, Patriarch Kirill of Moscow and All Russia visited Istanbul to discuss the situation with Patriarch Bartholomew of Constantinople in a fraternal manner. Our Synod called and continues to call for the pan-Orthodox deliberations on the burning issues. By the way, other Churches put forward the same suggestions. However, Constantinople, following and advancing a theory of some special status of the Patriarch of Constantinople, comparable to the status of the Pope in the Catholic world, rejected all the appeals calling for the conciliar resolution of the problems and by its actions destroyed the unity of the world Orthodoxy.

– Is it correct to speak of “schism”? And what does it exactly mean for the future of the inter-Orthodox relationships?

– The Patriarchate of Constantinople identified itself with the schism after recognizing the schismatic structures in Ukraine and after deciding to promote the project of “granting autocephaly” to the Ukrainian believers and, hence, to create a parallel structure in the territory of the canonical Church that stood by its people in times of the greatest hardships. By taking a decision on the impossibility to continue the Eucharistic communion with Constantinople the Synod of the Russian Orthodox Church only attested this really tragic fact.

The created division cannot but affect the whole Orthodox world. As Patriarch Irinej of Serbia has noted, the recent decisions of the Patriarchate of Constantinople not only lead to the deepening of the schism in the canonical territory of the Ukrainian Orthodox Church, but also open doors to new schisms in other Local Churches, as schismatics have been shown a way to “legalize” their status that does not require repentance in their schismatic actions and the return to the Church from which they fell away.

Besides, the mechanisms of inter-Orthodox dialogue and cooperation, which were developing for a long while, have been destroyed. Since all the Local Orthodox Churches are equal in their dignity, the Patriarchate of Constantinople, first in honour, acted as coordinator of the inter-Orthodox activities. Yet, now, when over a half of all the Orthodox Christians in the world are not in communion with it, Constantinople has lost this role.

– Ukraine is a land of conflict. How heavy is and will be the division of the Churches? Do you think there will be risk for peace, in relation to property of churches and monasteries?

– The attempts made by the state authorities of Ukraine to reformat the religious situation regardless of the opinion of the majority of the faithful are fraught with the most severe consequences for the civil peace in the conflict-worn country. Faith lives in human hearts, and it is the hearts and the souls of people that the division is piercing through, created by those who, interfering in the ecclesiastical affairs, are trying to thrust upon everyone an idea of legalizing the schism and establishing a new church structure.

Even prior to that the parishes of the canonical Church were often subjected to attacks by vandals; church buildings were seized, and the decisions to give them back were ignored. However, now the schismatics are openly laying claims to the great shrines of this land. For instance, recently the synod of the schismatic “Kievan Patriarchate” has made the following addition to the title of Philaret Denisenko – hiero-archimandrite of the Kiev Caves and Pochaev Lavras. Yet, these ancient Orthodox abodes, sacred for millions of the Orthodox Ukrainians, are not subordinate to him. They belong to the canonical Ukrainian Orthodox Church. Hence, this is the way to state his claims for the ownership of the largest monasteries in Ukraine. A question arises: whom is he going to settle there? At present each of these monasteries of the Ukrainian Church has more monks than Philaret has in all Ukraine. Monasticism is an ascetic deed, and no one is ready to make sacrifices for the sake of the schism.

I have to state with regret that by taking the decision to legalize the Ukrainian schismatics Constantinople has aggravated the religious situation in Ukraine. While committing the unlawful actions, Constantinople hypocritically called for abstaining from violence. Patriarch Irinej of Serbia has recently astutely said that it looked like turning a blind eye to the predictable consequences of its own actions and Pilate-like washing of hands.

– Are we facing an irreversible process? Or could there be conditions for “going back”, for the return to unity? Patriarch John X of Antioch and All the East calls for convocation of a Pan-Orthodox Council. Do you think it could be a way of resolution of conflict?

– The return to the unity is just what we want. Of course, there are certain conditions – what is needed is to return to the norms of the ecclesiastical order that the Orthodox Church observed for many centuries; what is needed is that the Ecumenical Patriarch stops his attempts to assume over-jurisdictional power to annul decisions of the Ecumenical Councils and to encroach on the territory of other Churches. I want to hope for the best.

– Which could be the consequences of this “schism” for the inter-confessional dialogue? What did Pope Francis tell you in Rome? Is he concerned?

– Of course, the break-off of the communion with the Patriarchate of Constantinople could not but affect the inter-Christian dialogue. I would like to note that according to the decision of the Holy Synod of the Russian Orthodox Church of September 14, representatives of the Moscow Patriarchate can no longer participate in the dialogues with other Christian Churches and communities that imply the co-chairmanship of representatives of Constantinople. It affects, for instance, the participation in the work of the Joint International Commission for Theological Dialogue between the Roman Catholic Church and the Orthodox Church.

While in Rome, I informed of this decision Pope Francis and Cardinal Kurt Koch, President of the Pontifical Council for Promoting Christian Unity, who co-chairs the Joint Commission on behalf of the Roman Catholic Church. They both expressed their deep concern over the current situation. It is clear to everyone that without the participation of the Russian Orthodox Church which numerically represents a half of the Orthodox world, the Orthodox-Catholic dialogue loses its meaning in many respects.

Needless to say that the bilateral relations of the Moscow Patriarchate with the Roman Catholic Church and other Christian confessions will continue to develop and, perhaps, will have more items on their agenda.