Source: DECR
Natalya Mihailova | 26 November 2015
A presentation of ‘Orthodox Encyclopedia’ took place at the 60th International Book Fair in Belgrade as part of the events devoted to the publishing work of the Russian Orthodox Church. A meeting with the authors of the edition took place on October 30. 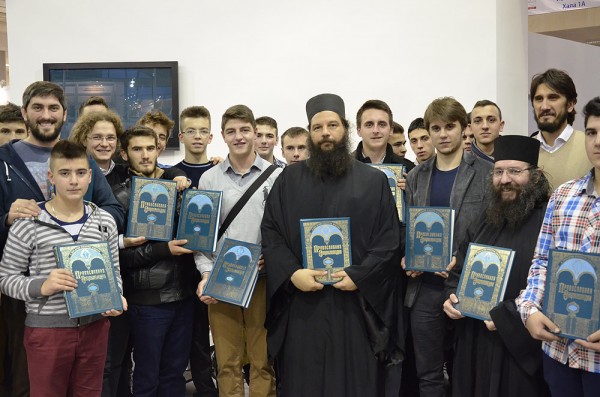 On the following day, a complete set of ‘Orthodoxy Encyclopedia’ was presented to the students and faculty of the Ss Cyril and Methodius Seminary in Prizren. The set was presented by Hieromonk Ignaty (Shestakov) of the Sretensky Monastery in Moscow.

The pro-rector of the Prizren Seminary, Protosinghel Andrew (Sajc) expressed gratitude to the Russian Orthodox Church for the gift so valuable for an educational institution and for the support the Russian Church gave for several years for the restoration of the seminary’s compound.

One of the oldest in the Serbian Church, the Prizren Seminary is the only educational institution that functions in the territory of Kosovo and Metohija. It resumed its work in 2012 in Prizen from which almost all the Serbian population had been driven out since 1999. At present, there are over 80 students and faculty in the seminary.

The ‘Orthodox Encyclopedia’ volumes will be put in the seminary’s library, pravoslavie.ru has reported.