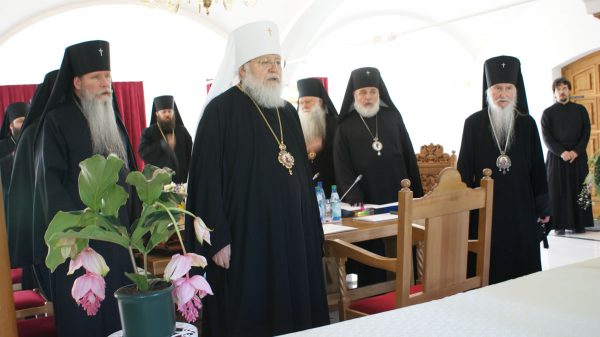 On Friday, June 9, 2017, the feast day of St John the Russian, His Eminence Archbishop Mark of Berlin and Germany celebrated Divine Liturgy at St Elizabeth Convent in Buchendorf, Germany. Praying at the service were archpastors of the Russian Orthodox Church Outside of Russia, who had arrived a day earlier.

His Grace Bishop Nicholas of Manhattan then performed a moleben to begin the convention of the Council of Bishops, after which the member hierarchs proceeded to the meeting hall and sang “This Day the Grace of the Holy Spirit Gathers Us.” His Eminence Metropolitan Hilarion of Eastern America and New York, First Hierarch of ROCOR, then opened the meeting with a greeting, wishing Divine aid to all the members of the Council. The bishops, who had already interceded for the awarding of a second panaghia to their Primate, listened as Archbishop Mark read a letter from His Holiness Patriarch Kirill to the Council, and decided to appeal to His Holiness to grant the requested award to Metropolitan Hilarion.

The Council then began its work; Archbishop Mark was elected Vice Chairman of the Council; and appointed as secretaries were His Grace Bishop Theodosius of Seattle, Vicar of the Western American Diocese, Bishop Nicholas and Protopriest Serafim Gan, Chancellor of the Synod of Bishops and Rector of St Seraphim Church of the Reestablishment of Unity Within the Russian Orthodox Church in Sea Cliff, NY.

His Eminence Archbishop Gabriel was appointed to a committee to draft the Council’s epistle, along with His Eminence Archbishop Michael of Geneva and Western Europe, Mitred Protopriest Nikolai Artemoff, Secretary of the Diocesan Council of the German Diocese and Senior Priest of the Cathedral of Holy New Martyrs and Confessors of Russia in Munich. A Counting Committee was appointed, comprising His Grace Bishop George of Canberra, Vicar of the Diocese of Australia and New Zealand, and His Grace Bishop Irenei of Sacramento, Second Vicar of the Western American Diocese.

Approving the proposed agenda, the bishops then heard reports by the ruling bishops on life in their respective dioceses, which evoked lively discussion on a wide range of matters pertaining to the ministry to monasteries, missions and parishes of the Russian Church Abroad.

The Council decided to prayerfully mark the 100th anniversary of the Russian Church Abroad in 2020, for which an organizing committee was established to plan jubilee events. Archbishop Peter of Chicago and Mid-America is to head the committee.

After the first day of work, the convent’s head, Abbess Maria, hosted a reception in honor of the guests.