Source: DECR
Natalya Mihailova | 29 June 2015
On 24 June 2015, a regular session of the Holy Synod of the Ukrainian Orthodox Church took place under the chairmanship of His Beatitude Metropolitan Onufry of Kiev and All Ukraine. 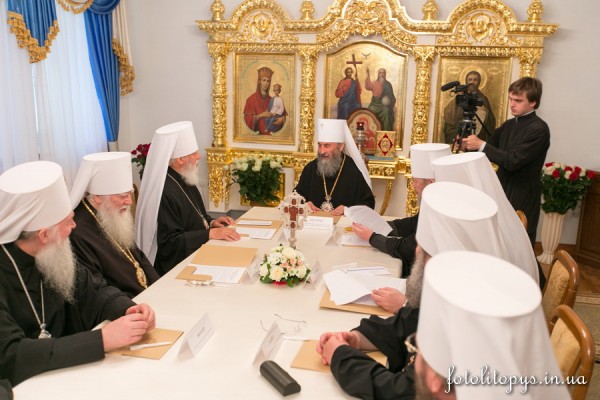 An appeal to the people of Ukrainian on the occasion of the 1000th anniversary of the demise of St. Prince Vladimir Equal-to-the-Apostles was adopted.

The Synod expressed its grave concern over the conflict in the eastern part of the country. ‘The flame of war in the east of Ukraine is threatening to engulf not only other regions of the country, but also the entire European continent. Mankind is on the brink of the global military conflict that can bring about harmful effect on the whole world’. Hierarchs of the Ukrainian Orthodox Church are convinced that ‘even profound contradictions should be settled through dialogue rather than in the military confrontation.’

The Synod has called the faithful of the Ukrainian Orthodox Church not to yield to provocations of the schismatics and keep interconfessional peace in the country. Also, the Synod confirmed that the Church is willing to conduct an open and constructive dialogue with representatives of the unrecognized church groups in Ukraine. ‘The dialogue should be conducted on the basis of canon law and without intervention of the non-church factors. The overcoming of schisms is the internal affair of the Church.’

The Synod has blessed the opening of the Institute of Postgraduate Studies at the Kievan Theological Academy and has taken several decisions pertaining to the life of the Ukrainian Orthodox Church.