Shrine in Turkey Uncovered as Tomb of Ancient Greek Boxer 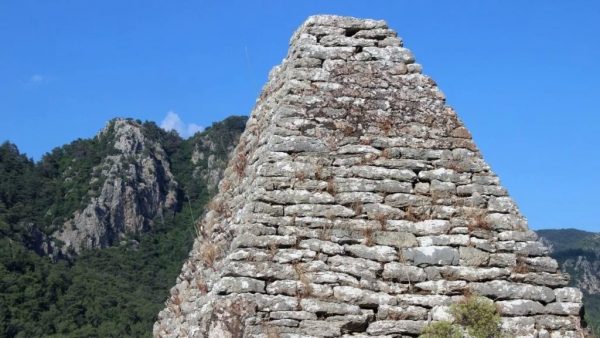 Experts have discovered the tomb belonging to Diagoras of Rhodes in Turkey. Photos: Karnaval.com

What was believed to be a saint’s shrine in Turkey, has been uncovered as the final resting place of ancient Greek boxer, Diagoras of Rhodes.

The 2,300-year-old tomb was believed to be a burial place of a holy person by locals in Turgut, located near Turkey’s Aegean coastal town of Marmaris. For years it has been a place of pilgrimage, with many young men known to take a handful of dirt from the site as good luck ahead of joining the army to complete their military service.

In the 1970s however, the religious roots of the site were called into question, and according to reports by Turkish newspaper Milliyet, was raided.

Now over 40 years on, and it would appear the findings were onto something, with experts now confirming that the tomb has ancient Greek roots. They have discovered that it belonged to Diagoras who lived in the fifth century BCE.

A descendent of Damagetus, King of Ialysus and Messenian hero, Aristomenes, he was celebrated for many of his own victories, believed to have won at the Olympics twice, four times in the Isthmian, twice in the Nemean, and once at in the Pythian Games, and the subsequent achievements of his sons and grandsons.

A statue of the boxer can be found on the Dodecanese island today.

Experts also discovered an inscription in the tomb, stating “I will be vigilant at the very top so as to ensure that no coward can come and destroy this grave,” Milliyet reported.

Metropolitan Amfilohije of Montenegro and the Littoral Reposes in the Lord

Archbishop of Cetinje, Metropolitan of Montenegro and Exarch of the Holy Throne of Pec, Amfilohije, after having received…

The Turkish government is rapidly converting the Chora Church into a mosque, shortly after the conversion into a mosque of…

Metropolitan Amfilohije of Montenegro and the…

Archbishop of Cetinje, Metropolitan of Montenegro and Exarch of the Holy Throne…

Beauty and Iconoclasm – Where We…

Most viewed articles
Why Do We Need Morning and Evening Prayers?213
Turks Erased Frescoes in Chora Church134
Don’t Turn Back123
Report Details the Horrific Experiences of Christians in North Korea108
Bishop Varlaam of Ploieşti Stresses that Christianity is the Most Persecuted Religion in the World85
What Is the Difference Between Fear of God and Panic?76
Beauty and Iconoclasm – Where We Find God54
Metropolitan Amfilohije of Montenegro and the Littoral Reposes in the Lord37
Condolences of Patriarch Kirill over the Death of People as a Result of Terrorist Action in Nice32
Will Our Names Be Written In Heaven?1
Most popular authors
Pravmir.com team306
Priest Andrei Chizhenko289
Protopresbyter Themistoklis Mourtzanos123
Aurelian Iftimiu86
Archpriest Stephen Freeman49
Archpriest Thaddaeus Hardenbrook1
Fr. James Guirguis1