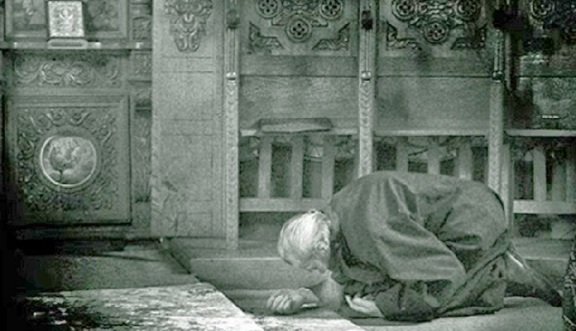 Very often, in our minds we think that the religious life has to do with God and that sin also has to do with Him. This is a mistake. The Church is a sanatorium, the disease is our own and we go there to be cured. The Doctor’s well, so we haven’t done Him a favour by going to hospital. His commandments are our medication. But even if we take the medication, we think we’re doing it for Him, so that He’ll be satisfied. Christ came into the world and showed us the mystery of the Church so that we could be cured. Very often we think that what we’re doing- fasting, labouring, praying, or anything else it might be- is being done for Him. Sometimes we think that He wants something from us on His own account and that He’s asking for things. It’s not like that. This is a fundamental mistake. The Doctor doesn’t want me, you or any other patient to follow a course of treatment because of some quirk of His; He wants the patient to get well.

It’s the same thing in the Church. Unless we get things into their proper order, we’ll never pass from guilt to repentance and from repentance to a return to our Father’s house. We have to realize that this way of life, sin, cuts us off from Life. The religious life isn’t thoughts: sometimes good, sometimes not so good, sometimes guilty, sometimes penitential. This can be mere sentimentality. You go to a Presanctified Liturgy, where the lighting’s dim, it’s very beautiful, and you find yourself relaxing. You go to Vespers and it’s quiet and solemn and you find peace. With this, we enter a way of thinking that brings relief, and, while this can sometimes be useful, it’s not entirely healthy.

People often go to confession burdened by their sins and when they’ve confessed they say ‘What a relief’. Or, if they’re encouraging somebody else to go to confession they say: ‘Go to confession and afterwards you’ll feel you’re flying. You’ll feel really comfortable’. This may often be the case, but you know, even if you went to a psychologist, you’d still feel you were flying and feel relieved. The issue of repentance in the Church, however, isn’t psychological, it isn’t about how you feel. Because the religious life isn’t about emotionalism. It’s real life. It’s everyday routine. It’s a way of life. Unless we understand this, we’ll never really love it. Then we go around seeking relief, but relief doesn’t involve any change. Repentance means I’ve changed the way by which I measure things. What I thought was gain, I now realize was loss, so I get rid of it.

It sometimes happens that people confess even from egotism, to set things straight with God, but not to change. It’s not at all uncommon for priests to hear the request: ‘Read a prayer for me, Father’. What on earth for? What does it even mean: ‘Read a prayer for me’. For whom? We’re got a complicated relationship and a prayer will put everything to rights and we’ll sleep soundly? This isn’t repentance.  Feeling better isn’t a reason for anybody to become Christian and enter the Church. We need to realize what is life and what is death, and gradually learn to prefer life.

Somebody steals two hens from the priest’s henhouse and after a while decides to go and confess. ‘Father,…

Most viewed articles
Metropolitan Hilarion Said Kuraev Could Be Excommunicated from the Church407
A Cruciform Providence128
The Light of Christ in Christians94
Metropolitan Onuphry Speaks on True Repentance84
The 16th Century Catholic Church in Granada Officially Transferred to the Russian Orthodox Parish69
Time and Human Life64
Moscow Priests Make Over 1,300 Visits to Patients with Coronavirus46
Metropolitan Onuphry Presents Kiev Theological Academy with a Valuable Gift44
Thanksgiving Service on the 70th Anniversary of the Arrival of Russian Refugees Held in San Francisco32
“They asked me: why on earth do you need this?” At 58, Elena became a nurse at a covid hospital14
Most popular authors
Pravmir.com team682
Archpriest Stephen Freeman128
Metropolitan Sotirios94
George Mantzarides64
Timofei Butenko14
Maria Trushanina4
Archpriest Michael Gillis1