Situation of religious minorities in Syria becomes even more menacing

Alarming news coming from different dioceses of the Orthodox Church of Antioch say that the situation of religious minorities in Syria becomes even more menacing due to the escalation of military confrontation in the country. 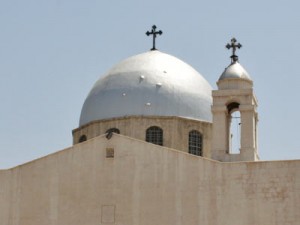 For instance, on 18 February 2013, the diocesan council of the archdiocese of Aleppo published a statement about the situation in Aleppo, saying that 20% of the city had been ruined and 80% of its infrastructure had been damaged thus posing problems with electricity and supply of fresh water.

Aleppo has been blockaded for seven months because of the battles and clashes in the north of Syria. Normal life in the city has been broken, people have lost their jobs, shops and 90% of schools have been closed.  Goods of prime necessity in Aleppo went up in price five-ten times due to the energy crisis and economic blockade.

Christian minority, not being a party to the conflict, raises up its voice for keeping peace in the country and appeals to the confronting parties to come to the negotiating table.

Yet, Christians suffer from violence and scourge of war no less than other people. Most part of them have already fled from Aleppo to other cities of Syria and Lebanon, others left the city for Europe and North America, while the poor Christian families remain in the city. Many houses of Christians and their public building, including an old Christian cathedral, have been destroyed.

Metropolitan of Aleppo and Alexandretta supports the families which need repair of their houses, medical treatment, medicaments, food and clothes.

The ruling hierarch of Aleppo, Metropolitan Paul, and the diocesan council expressed sincere gratitude to all who render spiritual and material assistance to the archdiocese in this dramatic situation.

Orthodox Christians of Aleppo offer up their prayers to God for the cessation of all forms of violence, for the beginning of negotiations between the conflicting parties, and for the re-establishment of peace for the much suffering people of Syria.

The Holy Bishops’ Council of the Russian Orthodox Church meeting on February 2-5, 2013, expressed deep concern over the sharp aggravation of the situation of Christians in the Middle East and North Africa. The Council’s resolution underscores that “the vanishing of Christianity in the lands where it has existed for two millennia and where the main events of the sacred history happened would become a spiritual and historical tragedy.”