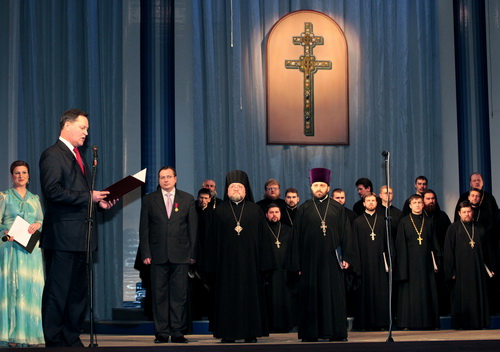 In addition to Belarusian choirs, the festival participants will feature four teams from Russia, three from Ukraine, two from Poland, and two teams from Romania and Armenia (one from each country). For example, among the participants will be the Avatamak choir from St. Gregory the Illuminator Church of the Etchmiadzin Monastery (Etchmiadzin is the spiritual center of the Armenian Apostolic Church), the Platon Maiboroda academic choir of the national radio company of Ukraine, and the choir of the Moscow Old Believers’ Cathedral of the Protection of the Mother of God. The jury chaired by composer Archpriest Andrei Bondarenko will also include representatives of six countries, with Armenia’s slot taken by France.

The festival will take place in Grodno on 19-22 February. Opening and closing ceremonies will be held in the regional drama theater on 19 and 22 February, competition auditions in the Cathedral of the Protection of the Mother of God. On 20 and 21 February the Grodno music college and the New Castle will host out-of-competition concerts by the choirs from Russia, Ukraine and Armenia. Polish choir from Olsztyn Bel Canto will perform in secondary school No. 36 which teaches the Polish language on 21 February.

This year the out-of-competition program will be extended. It will include a presentation of Larisa Gustova’s book “Church singing. Belarusian singing culture of the Orthodox tradition”, photo exhibitions “Our churches” and “Orthodox Serbia through the eyes of Belarusians”. The Grodno Museum of History of Religion is preparing an exhibition of St. Nicholas icons. The Krasnaya Zvezda cinema house will offer free screenings of movies and documentaries about the Orthodox church.

Archpriest Andrei Bondarenko noted that it will be difficult to assess the competition programs of very different groups. The requirements are high; the level of performance of the festival participants increases from year to year. He stressed that the festival is a celebration, and a living testimony of Orthodoxy. It gives the opportunity to get familiar with the ethnic features of the Orthodox culture (and canticles) of other countries, and serves as the platform for personal communication of musicians and the believers.

The Kalozha church music festival was established in Grodno in 2002. It was timed to the 10th anniversary of the revival of the Grodno Eparchy. In 2011 the Belarusian Culture Ministry presented the status of an international event to the festival. The organizers of the Kalozha church music festival are the Grodno Orthodox Eparchy and the Grodno Oblast Executive Committee. The festival awards winners in eight nominations. This year the Kalozha festival will be one of the highlights of the year-long campaign “Grodno is the Capital of Culture of Belarus” which will feature more than 300 diverse events. Representatives of the diplomatic missions of the participating countries and other Christian denominations have been invited to attend the festival. According to Archpriest Alexander Veliseichik, Metropolitan Pavel of Minsk and Slutsk, Patriarchal Exarch of All Belarus, is expected to attend the closing ceremony of the festival.