Source: Sputnik
Orthodox memorial services for the victims of the Tu-154 plane crash will be held on Thursday at all churches in Sochi, the city administration announced in a statement.
Natalya Mihailova | 02 February 2017
OCHI (Sputnik) – On December 25, 2016, the Russian Defense Ministry's Tu-154 plane heading from Moscow to Syria crashed shortly after refueling and take-off from the Russian southern city of Adler, near Sochi. 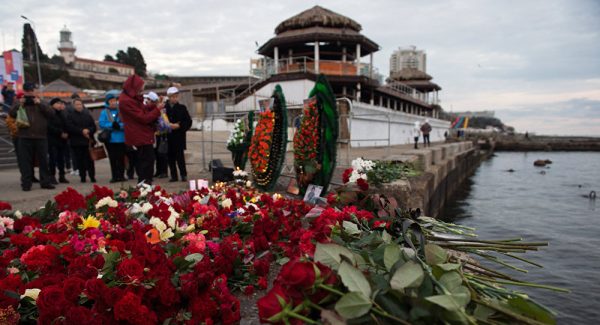 The plane was carrying 92 people, including eight crew members, 64 musicians of the Alexandrov Ensemble, nine reporters, head of Spravedlivaya Pomoshch (Fair Aid) charity Elizaveta Glinka, and two federal civil servants. None of them survived the crash.

“At 10:00 [07:00 GMT on Thursday] in all the churches of the city of Sochi, including the Svyato-Troitsky Temple, memorial services will start for those who died in the Tu-154 plane crash near Sochi,” the city administration said statement says.

Earlier this month, the Russian Defense Ministry stressed that the cause of the Tu-154 crash had not been established, contrary to some media reports.

Russia’s Emergencies Minister Vladimir Puchkov said on Sunday that work at the Tu-154 crash site in the Black Sea will continue for as long as needed.

Most viewed articles
Our Lenten Journey112
The Heart of the Scriptures107
Serbian Patriarch Porfirije Gives Interview to Serbian National Television81
Patriarch Kirill Speaks on the Only Right Path79
Metropolitan Onuphry: Fasting and Prayer Are Two Wings That Help People Draw Near God66
Metropolitan Hilarion: Real People in the Virtual World of the Internet Also Need to Hear the Word of a Priest63
Reading the Bible Has Given Christians Hope During the Pandemic – Survey35
Bishop Benedict of Bistrița in Relation to Young People: I Want to Be One of Them34
Moses and the Ten Words25
Sunday of the Samaritan Woman2
Most popular authors
Pravmir.com team324
Priest Luke A. Veronis112
Frederica Mathewes-Green107
Aurelian Iftimiu34
Archpriest Lawrence Farley25