Some Thoughts on Heaven and the Real Hell 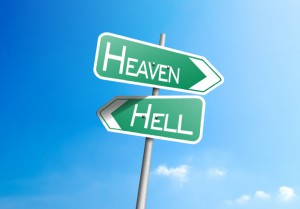 Have you ever wondered how a loving and merciful God could sentence any of his children to an eternity in hell?

If you’ve never asked the question, chances are you’ve heard another do so. Revisionists identify it as a fundamental inconsistency in traditional Christian doctrine.

Yet the scenario itself is far from traditional, since it presupposes the vengeful, honor-bound deity who only emerged in the medieval, feudal West.

Theologians (like Anselm of Canterbury) began proclaiming a God who was bound by necessity to demand satisfaction for the affront to his honor given by Adam’s disobedience.

He began by killing Adam and his descendants, but this was insufficient to satisfy him since man was his creature anyway. Only the death of an equal could restore his honor.

So he sent his son into the world in order to kill him, thereby restoring his honor and assuaging his anger toward man.

On Judgment Day, we’ll stand before this deity. Our deeds will be weighed in the balance. If the bad outnumber the good, he’ll let the demons haul us into their dungeon, where they’ll eat our livers across eternity.

There’s one problem with this gruesome image, however. It makes the demons God’s co-workers in dispensing justice. It rewards their evil, giving them their jollies at our expense.

Yet Scripture says they and their master will also come under judgment. They’ll be defendants, not courtroom staff.

Whatever happened to the God who desires not the death of a sinner, but that he turn from his way and live, that he be saved and come to the knowledge of the truth — the God who sent his son into the world not to kill him for honor’s sake, but to let him die so that death’s dominion could be destroyed?

The medieval, feudal lord described above inspires as much love as the IRS. He’s fair, but unmoved to pity. Is it any wonder some choose to hate him?

How can divine mercy and judgment be reconciled? Theories abound: Everyone goes to heaven. Hell is mere separation from God. Sinners are annihilated rather than punished. Fascinating, but unorthodox.

Eastern Christianity never dogmatized any one description of judgment. Unlike the scholastic West, it allowed for mystery. Of the abounding images, one preserves both God’s love and righteousness.

Several church fathers foretell a judgment consisting of God’s love itself, flowing from his throne like a river of fire. For those who’ve learned to receive and give love, God’s river of love will be heavenly bliss that irrigates paradise and gives warmth and light. For those who cannot or will not love, that love will be an unquenchable, consuming fire.

Gold is purified in this flame, but wax melts before it. In either case, God loves just the same.

This heaven and hell aren’t separate places, for the rich man in torment beheld Lazarus in Abraham’s bosom. Rather, they’re within us even now.

Nor is hell simply for those twisted monsters we read about in the news. Many who appear righteous will find themselves burned by love, such as the prodigal son’s older brother, who so resented his father’s generosity and his brother’s return that he refused to go in to their feast. Bitterness drove him to exile.

God longs to embrace us. Those who love will feel the warmth of that embrace, while those without love will be burned by it. When someone we despise shows us kindness, our hearts burn with our own hypocrisy.

Such a judgment warns that we’d better learn to love. Love, rather than any mere claim to faith, will be our only defense. 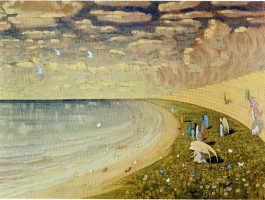 Yesterday, I was on an art website, a quite legitimate one, and it’s a sad commentary…