Source: DECR
Natalya Mihailova | 02 October 2014
On September 30, 2014, the Special Inter-Orthodox Commission for Preparing a Pan-Orthodox Council began its work at the Patriarchate of Constantinople’s Ecumenical Center in Chambesy near Geneva. The aim of the meeting is to edit the earlier adopted draft documents of the Holy and Great Council of the Orthodox Church. 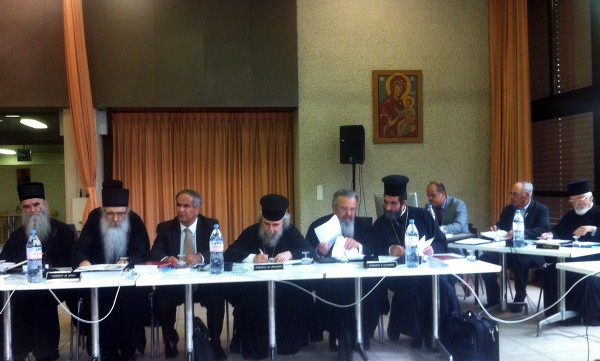 The decision to convene the Commission was made by the Meeting of the Primates of Local Orthodox Churches which took place on March 6-9, 2014, in Istanbul.

With the blessing of His Holiness Patriarch Kirill of Moscow and All Russia, the Russian Orthodox Church is represented at this meeting by a delegation led by Metropolitan Hilarion of Volokolamsk, head of the Department for External Church Relations. The delegation includes Archpriest Nikolay Balashov, a DECR vice-chairman, and Deacon Anatoly Churyakov, DECR, who will act as interpreter.

Addressing the Commission chaired by Metropolitan John of Pergamon (Patriarchate of Constantinople), Metropolitan Hilarion conveyed it greetings and best wishes from His Holiness Patriarch Kirill, noting that His Holiness “in his previous capacity as chairman of the Moscow Patriarchate’s department for external church relations, had participated for many years in the preparations of the Pan-Orthodox Council, and today, as Patriarch of Moscow and All Russia, continues paying personal attention to this most important inter-Orthodox topic”.

While underlining that “the future Council cannot be called “Ecumenical” and put on the same level with the seven Ecumenical Councils, on which our entire Orthodox faith is built”, Metropolitan Hilarion expressed a wish that the Pan-Orthodox Council, which has been in preparation for over fifty years, may become “an event which will unite our Churches and help clarify common positions on some problems of today which have been put on the agenda of the future Council”. For this reason the Russian Orthodox Church “attaches great importance to the process of its preparation” and regards as an important task the work of the Special Commission to review the prepared documents, assuming that “what needs to be done is not only editing but also introducing serious changes to make these texts really vital”.

In working on the documents dealing with problems of inter-Christians relations, it is necessary to fully take into account “serious changes that have taken place in a whole number of Protestant member communities of the World Council of Churches, as many of them have taken the path of liberalization of the doctrine and moral teaching; we have actually suspended dialogue with many of them”. The Council’s documents should clearly show that the participation of Orthodox Christians in the work of inter-Christian organizations “is based on our firm conviction that only the Orthodox Church represents the One Holy, Catholic and Apostolic Church”, the DECR chairman said.

His Eminence also expressed profound regret that representatives of the Orthodox Church of the Czech Lands and Slovakia were not invited to the Commission’s meeting. He expressed hope that the host of the meeting will reconsider this decision since without it it is impossible to implement in the proper way the resolutions adopted by the Istanbul Meeting of Primates of Local Orthodox Churches that all the decisions in the process of preparations for the Pan-Orthodox Council should be made on the basis of consensus among the delegations of all the autocephalous Local Churches equal in rights.

The Special Commission will work till October 3.