Speech of His Beatitude Daniel, Patriarch of Romania, at the Opening Session of the Synaxis of the Primates of the Autocephalous Orthodox Churches 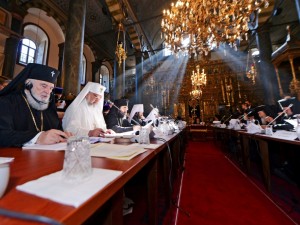 The pan-Orthodox Synaxis has at present a consultative and orientating role in order to strengthen the sacramental communion through Eucharistic concelebration, pastoral co-responsibility through dialogue and missionary cooperation through action, among the Autocephalous Orthodox Churches and in the relations of Orthodoxy with the world of today. The spiritual authority of the Synaxis increases mostly by promoting co-responsibility for the unity of Orthodoxy.

The pan-Orthodox Synaxis offers the image of Orthodoxy as being more a spiritual family of Orthodox Churches from different regions, countries and ethnicities than an international religious institution.

The Synaxis foster primarily the fraternal communion and afterwards joint programs of action. Therefore, the pan-Orthodox Synaxes issued so far mainly messages and recommendations for the Church and society.

Since the Holy Canons require that the bishops should gather in Synod at least twice a year (37 Apostolic canon, canon 5 of the First Ecumenical Council, canon 19 of the Fourth Ecumenical Council and canon 20 of the local Synod of Antioch), the pan-Orthodox Synaxes should be organised at least once every two years, in order to intensify today the pan-Orthodox communion, cooperation and solidarity.

Paradoxically, the Autocephalous Orthodox Churches cultivate today more the international official dialogues with other Churches than the dialogue and cooperation among them.

At present, more consultation and cooperation among the sister Orthodox Churches is needed, in front of three major challenges facing the world today:

2.migration phenomenon, which generates new social and pastoral problems, especially when migration is caused by war or persecutions, as it can be seen today in Syria and in other parts of the world;

3.economic and financial crisis, which calls us to greater solidarity with the poor, the sick and the lonely ones.

The spiritual, pastoral and social mission of Orthodoxy calls us today to unite more territorial canonical jurisdiction with pastoral responsibility for concrete persons and local Autocephaly with universal or ecumenical Orthodoxy.

In this sense, we thank His Holiness Bartholomew of Constantinople, the Ecumenical Patriarch, for inviting us to participate in this Synaxis, with the hope that fraternal dialogue and cooperation help us to love and serve even more the Orthodoxy and her mission in contemporary society.