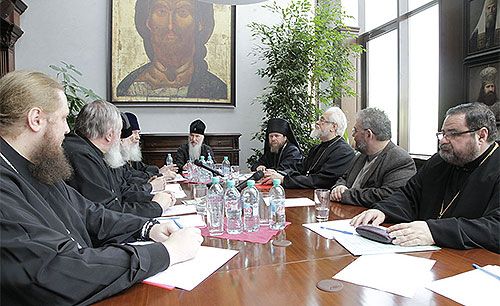 His Eminence Archbishop Mark of Berlin and Germany presided.

Discussed were the following documents: “On Lenten Discipline” (Priest Ioann Miroliub) and “Principles of the Interpretation of Canon Law” (Protopriest Vladislav Tsypin).

Presenting on the topic “The Codification of Sources of Church Law” was the Sergei Leonidovich Kravets, Director of the Ecclesiastical Sciences Center “Pravoslavnaja entsiklopedija” [Orthodox Encyclopedia].

The committee deliberated on the resolution of His Holiness Patriarch Kirill of Moscow and All Russia regarding the draft document entitled “Formalizing the Practice of Matrimonial Services (Including Subsequent Marriages)” previously presented to the Editorial Commission of the Inter-Council Presence of the Russian Orthodox Church.

The next meeting of the committee will be held on January 28, 2015.