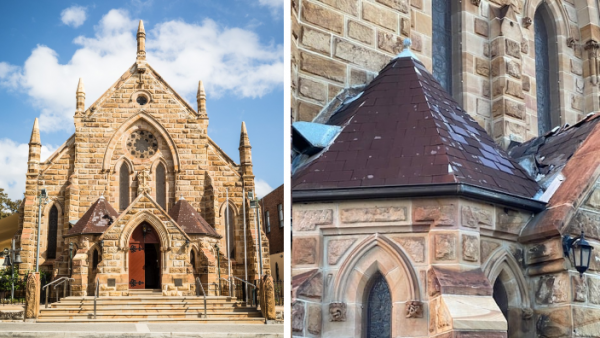 St Nectarios Burwood prior to the recent renovations on the slate roof. Photos: Greek Herald.

St Nectarios Greek Orthodox Church in Burwood is in the final stages of extensive restoration works by fixing the slate roof at the entrance to the church.

The slate roof was in need of urgent restoration, with the specialist heritage work estimated to cost more than $20,000 to complete.

But with the help of a $10,000 grant received from the NSW Government following the Parish Board’s application under the 2020 Community Building Partnerships Program, the work is now underway.

“These works, supported financially by both the Federal and NSW Governments, have enabled these once in a lifetime restoration works, which we would not have been able to deliver without this financial support,” President of the Board, Penelopy Kioussis, tells The Greek Herald.

“We are so grateful for this assistance to preserve and beautify our Church, which is an important heritage building that is much loved – not only by the Greek community, but by the broader community as well.”

In a Facebook post, Member for Strathfield, Jodi McKay MP, congratulated the community on their renovations and said she was pleased to have been able to help as the church is in her electorate.

“This is very exciting. I look forward to seeing the completed works and of course everyone, very soon,” Ms McKay added in a Facebook comment.

Restoration works to preserve and beautify the church have been ongoing over the last few years, after receiving $300,000 in funding from the Federal Government under the Community Development Grants Programme. The St Nectarios Burwood Parish and Community provided the remaining $99,879.

The works, which were completed in 2019 and officially unveiled at the 140th anniversary of the church, included treatment of damp issues in the sandstone walls, replastering of internal walls, replacing the fences and gates, upgrading the electrical switchboard and waterproofing the external sandstone walls, among many other things.