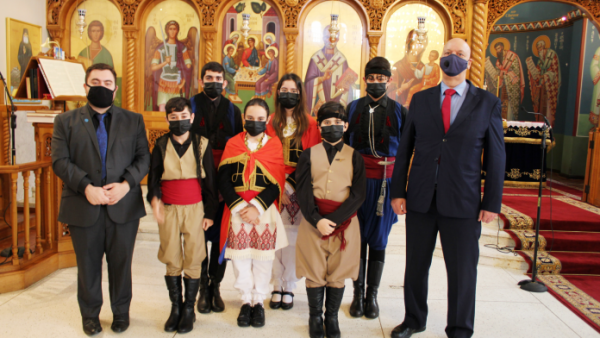 A solemn church service and memorial was held at St Nicholas Greek Orthodox Church in Marrickville on Sunday to commemorate the 155th anniversary of the Arkadi Monastery holocaust.

Organised by the Cretan Association of Sydney and New South Wales, the event is held annually to remember the Cretans who paid the ultimate sacrifice at the Monastery of Arkadi in 1866.

This year, Cretan youth stood proudly at the front of the church dressed in traditional costumes and wearing a face mask due to the current COVID-19 restrictions in NSW.

“It is an honour to be here today. It is an important day as we remember the Cretan sacrifice and battle for freedom in Arkadi on November 9, 1866. May God rest their souls. They will always be in our memory and heart,” Mr Yiannakodimos told The Greek Herald on the day.

In a small speech after the service, Bishop Emilianos also acknowledged the ultimate sacrifice paid by the Cretans during the Arkadi holocaust and encouraged everyone to remember their brave actions.