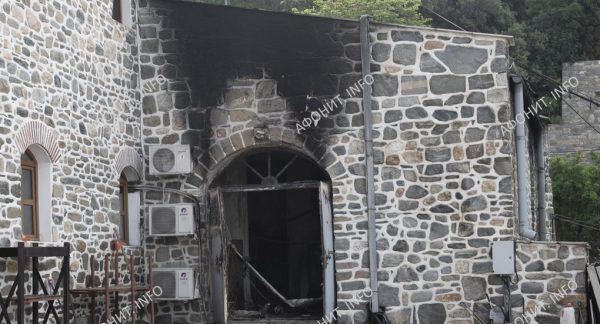 A fire broke out at the Russian St. Panteleimon’s Monastery on Mt. Athos on Sunday, causing serious damage that has yet to be fully assessed. Thankfully, there were no human casualties, and none of the monastery’s sacred relics or icons were damaged, reports Tsargrad.

However, the extent of the damage is rather serious and the material damage is quite large.

In an interview with Tsargrad, the abbot of the monastery, Archimandrite Evlogy (Ivanov) explained that during the night of Saturday to Sunday, the room housing the monastery’s generators and other technical equipment caught fire and completely burned out. It is unclear what caused the fire. Only one small generator survived, with which they are powering the kitchen. Even the lights in the church are all turned off.

The life of the monastery continues, of course, but the brethren are not able to accept pilgrims for the time being, and the approximately 150 guests who were staying there at the time had to leave, as equipment necessary for serving the pilgrims cannot be operated. The monastery has suffered a serious financial blow due to the fire, as its several workshops—metal work, carpentry, welding—require electricity, and in the best-case scenario, according to Fr. Evlogy, it will take about a month to resume their work.

Fr. Evlogy especially noted that no people were harmed in the fire, nor were any sacred objects, and the liturgical life of the monastery continues undisturbed.

About 100 brothers and a small number of workers remain living in the monastery.

“Glory to God for all things,” Fr. Evlogy concluded, quoting the final words of the Holy Hierarch St. John Chrysostom who reposed in exile.