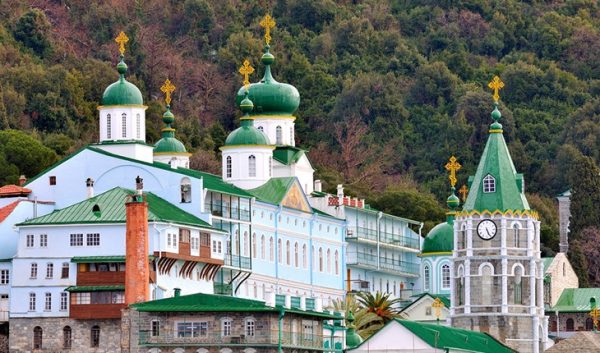 Mt. Athos, February 9, 2019 – The gates of St. Panteleimon’s Monastery on Mt. Athos were closed to a visiting Ukrainian schismatic bishop and his delegation today.

Archimandrite Evlogy, the abbot of the Russian-tradition monastery, explained to “Bishop” Paul of the Diocese of Odessa and the Baltic of the Ukrainian schismatic church and those with him that they could not enter the territory of the monastery because they are not recognized as Orthodox there, reports the Union of Orthodox Journalists and Romfea.

Abbot Evlogy closed the monastery gates to the schismatic representatives and did not bless them to enter the church or venerate the relics, explaining that St. Panteleimon’s Monastery does not recognize them as clergy now, nor will they in the future. Other monasteries, including Philothou and Karakallou, have also said that they would shut their gates to the schismatics.

The schismatics arrived on Mt. Athos on Thursday and served Vespers, and Liturgy the next day at Pantocrator Monastery. Pantocrator was one of the 5 out of 20 monasteries that had voted to send a delegation to the enthronement of “Metropolitan” Epiphany Dumenko, the primate of the Ukrainian schismatic church, in Kiev on February 3.

The delegation has been received at at least one other monastery on the Holy Mountain thus far. Before trying to visit St. Panteleimon’s, they were received by Abbot Bartholomew of New Esphigmenou Monastery yesterday, according to Romfea.

The New Esphigmenou brotherhood was created by Constantinople in 2002 to replace that of Esphigmenou which, in taking a stand against Constantinople’s ecumenistic activity, has gone too far in the opposite direction and has schismed from the Church.

The Ukrainian delegation exchanged gifts with the brotherhood and venerated the relics housed at the monastery. They discussed with the abbot the “important unifying role” of the Patriarchate of Constantinople, the problems of Esphigmenou, and the need for the unity of all Orthodox Christians. The delegation also invited Archimandrite Bartholomew to visit Ukraine.

His Grace Bishop Ambrose of Verey, the rector of the Moscow Spiritual Academy, commented on the situation on his telegram channel: “Before our eyes, one after another Athonite monastery is uniting with the schismatics and committing an unthinkable betrayal of the Orthodox people in Ukraine, who are being driven out, blackmailed, beaten, and expelled from their home churches.”

“Xenophontos, Pantocrator, and New Esphigmenou have already entered into communion with schismatics and self-consecrated people, shaking hands with the persecutors of the Church in Ukraine… How subtly the enemy of mankind mocks people!” Bp. Ambrose added.

Most viewed articles
The Trap of Religiosity113
Patriarch Daniel explains why the Hesychasts were the most sought-after spiritual fathers and what is a prayerful reason96
Bishop Nicholas of Manhattan visits Holy Cross Monastery in West Virginia84
Lord, Save Me!73
Why Everything Is Important (but not the stuff you might imagine)65
Condolences of Patriarch Kirill over the death of believers in the fire that broke out in Abu-Seifein Church in Cairo45
25 Years of Help: the Ship-Church Goes On its 25th Voyage to Distant Villages44
St. Tikhon Church to host Liturgical Music Symposium in October 202240
Ukrainian Church Celebrates Metropolitan Onuphry’s 8th Anniversary of His Enthronement21
Most popular authors
Pravmir.com team234
Vasileios Stoyiannos113
Aurelian Iftimiu96
Fr. Theodore Stylianopoulos73
Archpriest Stephen Freeman65