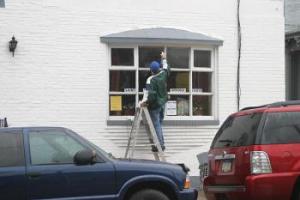 Sprucing up the St. Seraphim Center in Chambersburg, PA

Last fall, the Antiochian parish of St. Mary in Chambersburg, PA, began its fourth year of service to the surrounding community through the St. Seraphim Orthodox Center (SS OC). Affiliated with the Fellowship of Orthodox Christians United to Serve (FOCUS), the ministry serves lunch to some 35 to 45 guests on Thursdays and Saturdays, complimenting the lunch schedule of the local Salvation Army.

During his August 2012 visit to St. Mary Orthodox Church, His Grace Bishop Thomas repeatedly stressed the importance of the parish’s work at the Center in the downtown area, and urged parishioners to continue and extend this ministry to the wider community.At that time, His Grace was presented with a report on the Center written by one of St. Mary’s high school students, Ariel Wetzel, who gave an overview of the history of the SS OC, as well as excerpts from interviews she conducted among those engaged in the ministry.

The idea of a center came from Fr. Tom Klein, a priest at the Epiphany of our Lord Church (American Carpatho-Russian Orthodox Diocese in the U.S.A.) Huntington, PA. He came to Antiochian priest Fr. Theodore Pulcini of St. Mary’s and suggested St. Seraphim of Sarov as the center’s patron saint. After interested parish members and Frs. Ted and Tom met several times to discuss the idea, Fr. Ted had the group commit to prayer as they contemplated the idea, asking for St. Seraphim’s intercession and guidance. When the group finally decided to go through with the idea, an apartment was rented on Route 30, Lincoln Way West, and the St. Seraphim Center came to be.

Ariel then describes the work of the Center:

“The St. Seraphim Center is a ministry conducted by the parish of St. Mary’s … to feed the needy in the Chambersburg area. The Center serves lunch to some 35 to 45 guests twice a week on Thursdays and Saturdays, which compliments the lunch schedule of the Salvation Army across the street.

The Center is well-recognized as a welcoming community center in the Chambersburg area. It also offers recycled articles of clothing, free of charge, to men, women, and children. On a typical Thursday or Saturday, the volunteers arrive around 9:00 a.m. They prepare for the day by making hot dogs and soup, and setting out sandwiches and baked goods.

The doors open at 10:00, when people can come in, take a seat, and partake of the food and drinks. The Center has a friendly community atmosphere. This continues until 1:00pm, when the center closes and the volunteers clean up and leave.”

What is perhaps most moving about Ariel’s report are the reflections offered by various SS OC staff members whom she interviewed.

“I have found that when people (in whatever circumstances in life) are treated with dignity and respect, they will respond in like manner. I also see how our center provides people with more than just a meal. It provides them with companionship . . . whether with other visitors or staff. . . . The time spent at SS OC is a way for some of our regulars to alleviate loneliness.”

“I had wanted to be involved in the Center personally for some time. I am a “cradle” Orthodox Christian, but have never been a member of a church that did anything like this. While we are taught not to be proud, the SS OC makes me feel proud to be part of the St. Mary Community.”

“The foremost lesson I have learned from working at St. Seraphim is that anybody could be put in a situation to need our services. For example, we have fed a women with an Ivy League degree and a man who fifteen years ago was in a position of authority in our town. Also, instead of dreading service, I actually look forward to talking with our guests. They have names, faces and stories.”

The report also includes staff reflections on challenges and difficulties encountered at the SS OC. There is always the problem of funding. What enabled the Center to get started was a generous seed grant given in 2009 by FOCUS North America. Since then, the generosity of both parishioners and those outside the parish have kept the Center in operation. Then there was the challenge of establishing trust “on the street.” Ariel’s statistics clearly show that when the Center opened its doors in November 2009, the number of those who availed themselves of its services was small. However,as time passed and people came to trust the Center and its staff, the numbers steadily increased.

Then, of course, there are the problems presented by the behavior of some of the guests, but these issues have managed to resolve themselves over time, largely as a result of the unofficial “code of behavior” enforced among the guests themselves.

When Bishop Thomas visited the Center, he was impressed by the spirit he found among both the staff and the guests. He reflected on this in his remarks after Vespers that evening, in which he encouraged St. Mary’s parishioners not to “hide their works under a bushel basket” but to make the SS OC known so that others can conduct similar ministries throughout the diocese.

“The need is great and increasing everywhere,” he observed.

Read about a 2009 visit of Bishop Thomas to the Center, or obtain a copy of Ariel Wetzel’s full report from Fr. Ted Pulcini at pulcini@ dickinson.edu