On St Tatiana’s Day, Patriarch Kirill celebrates Divine Liturgy at the Church of Christ the Savior

Source: DECR
Natalya Mihailova | 27 January 2015
On January 25, 2015, the commemoration day of St Tatiana, His Holiness Patriarch Kirill of Moscow and All Russia celebrated the Divine Liturgy at the cathedral Church of Christ the Saviour in Moscow. 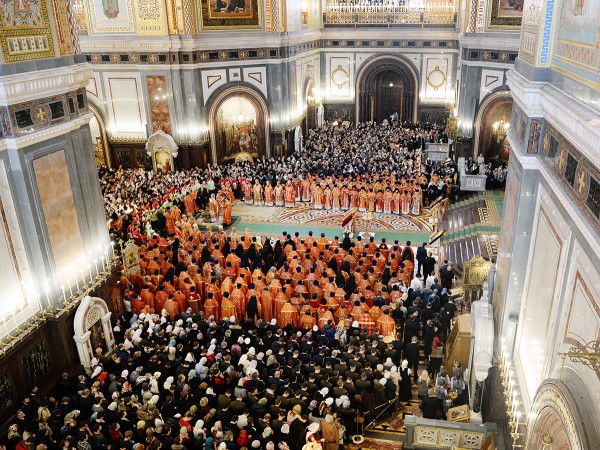 His Holiness was assisted by a great assembly of bishops and priests. The service was attended by presidents of universities and rectors of higher education institutions in many Russian regions. The Metropolia of Nizhniy Novgorod, for instance, sent to the national St. Tatiana celebrations, a delegation consisting of 600 professors and students from both secular and theological schools.

Along with the Church of Christ the Saviour’s choir, there sang the academic male choir of the National Nuclear Research University MePHI.

After the Prayer of Ardent Supplication, Patriarch Kirill lifted up a prayer for peace in Ukraine.

After the liturgy, His Holiness led the congregation in praise to St. Tatiana and delivered a primatial homily.

Patriarch Kirill awarded the head of the Federal Agency for Youth, Mr. S. Pospelov, with the Patriarchal badge ‘The 700th anniversary of St. Sergius of Radonezh’, in recognition of his service of the Church. The same award was granted to young volunteers who organized a volunteers’ movement in 2014 with the blessing of His Holiness.

The rector of Moscow State University, V. Sadovnichy, greeted His Holiness and the congregation on the occasion of St Tatiana’s Day as the day of Russian students. ‘We thank you, Your Holiness, for the decision to celebrate the festive liturgy in the Church of Christ the Saviour, the symbol of our Church. Assembled here are representatives of the university corporation – students, rectors, and we all listened to your homily with great attention’, he said. He also spoke of the 260th anniversary of the first Russian university, the history of the university church of St Tatiana and the celebrations held on St. Tatiana’s Day. ‘Today as never before our society needs that both the professors’ corporation and the Church should together engage in the education of young people, because our future depends on the schoolchildren who have come to our universities. What kind of people they will be, how they will live, what they will believe in, and what their inner world will be, will define our country’, V. Sadovnichy said.

In his response, Patriarch Kirill said in particular, ‘I would like to cordially thank you for the participation in this service together with all the rectors and professors present here and to greet you on the occasion of the MSU’s 260th anniversary. We have decided to pray in this church so that not only Moscow University students and professors but also members of teachers’ corporation and students from other universities may together with us praise this great saint and pray for the future of our universities, institutes and our science’.

After the service, there were students’ festivities near the Church of Christ the Saviour.