Source: The Antiochian Orthodox Christian Archdiocese of North America
Natalya Mihailova | 18 September 2015
On Monday, September 14, 2015, the Board of Trustees and Faculty of St. Vladimir’s Seminary bestowed a Doctor of Divinity degree, honoris causa, on His Eminence Metropolitan Joseph. 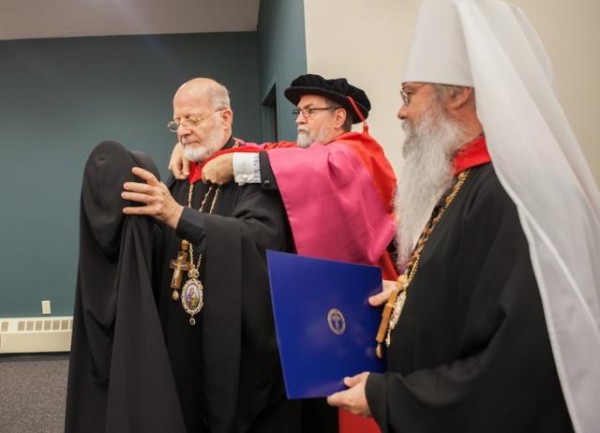 Additionally, His Beatitude the Most Blessed Tikhon, primate of the Orthodox Church in America, was awarded with an honorary doctorate as well.

“We have the great honor today of being able to bestow the degree of Doctor of Divinity, honoris causa, not upon one, but two worthy recipients—two leading hierarchs of the Orthodox Church in this country—the President and Vice President of the Board of Trustees of St. Vladimir’s Seminary,” noted the Very Rev. Dr. John Behr, Dean. “Both hierarchs, although only appointed to their positions in recent years, have distinguished themselves through many years of ministry. Your Beatitude and Your Eminence, you truly honor us today by your presence and acceptance of the degree to be awarded.”

In the citations read aloud by Dr. Peter Bouteneff, professor of Systematic Theology, His Eminence Metropolitan Joseph was praised as a “true pastor of pastors” and “a leading voice among the hierarchs,” while His Beatitude Metropolitan Tikhon was commended for his commitment to securing the future and stability of theological education in North America, with a particular interest in the spiritual formation of clergy.

After receiving the Doctor of Divinity, honoris causa, His Eminence expressed his gratitude to the Board of Trustees and Faculty. “St. Vladimir’s has a long history of educating leaders and theologians,” said Metropolitan Joseph. “Many of our hierarchs have come to us with a firm foundation, imparted to them by St. Vladimir’s Seminary. I pledge to do all I can during my tenure to maintain and enhance this relationship.” 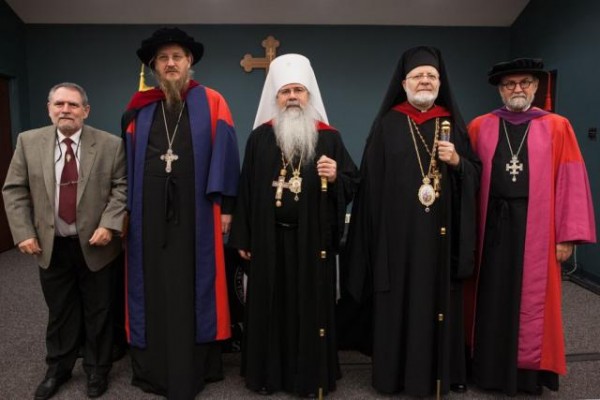 In his acceptance speech, His Beatitude Metropolitan Tikhon remarked, “Our church in North America, as His Eminence so clearly stated, is composed of people from various backgrounds, all of us struggling to be united in Christ. It is at institutions like St. Vladimir’s that that effort—striving for unity in Christ—is actualized.”

Following the bestowal of the honorary doctorates, Professor Predrag Matejic, curator of the Hilandar Research Library and director of the Resource Center for Medieval Slavic Studies, presented the third annual Father John Meyendorff Memorial Lecture. The presentation was titled “Byzantium, the Slavs, and the Rise of the Russian Orthodox Church.”

“Father John was known as an outstanding and warm scholar, encouraging younger scholars in their work and able to answer almost any question—however arcane or obscure,” said Fr. John Behr. “As such, it is very fitting that we have the honor this evening of hearing from another scholar, Dr. Predrag Matejic, who also has such a reputation: for encouraging scholars across the world in their study of Slavic Christianity and for being able to answer the most obscure questions pertaining to Byzantino-Slavic Christianity.”

Dr. Matejic focused on three historical periods of Slavic Orthodoxy: the conversion of the Slavs and the establishment of the Glagolitic alphabet; the rule and influence of Simeon I the Great of Bulgaria; and the immediate effects of the fall of Constantinople in 1453 on the Russian Orthodox Church.

View a photo gallery from the Orthodox Church in America