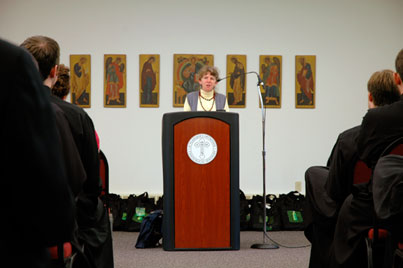 Sponsored by Saint Herman’s Society for Orthodox Ecology, the lecture will be preceded by an Akathist service in Three Hierarchs Chapel at 6:00 p.m. and a tree-planting ceremony on the seminary grounds. The lecture will be held in the Metropolitan Philip Auditorium of the John G. Rangos Family Building, and a public reception will follow.

“The lecture will consider the importance of the metaphors that we choose, and will suggest that some of the energy expended in defining man’s place in creation—as king, priest, or steward, for example—might be better spent in deepening our theological understanding of the material creation in which God has placed us,” explained Dr. Theokritoff.  “Metaphors such as ‘priest of creation’ are often over-used, and can obscure rather than illuminate the traditional understanding of God’s creation.”

Dr. Theokritoff studied at Somerville and Wolfson Colleges, Oxford, and earned a doctorate in liturgical theology under the supervision of His Eminence, Metropolitan Kallistos [Ware] of Diokleia.  She has served as visiting lecturer at the Institute of Orthodox Christian Studies in Cambridge and as visiting Orthodox Tutor at the Ecumenical Institute at Bossey, Switzerland.  She is co-editor of the Cambridge Companion to Orthodox Christian Theology and author of Living in God’s Creation: Orthodox Perspectives on Ecology.”

Additional information and a flier in PDF format are available here.