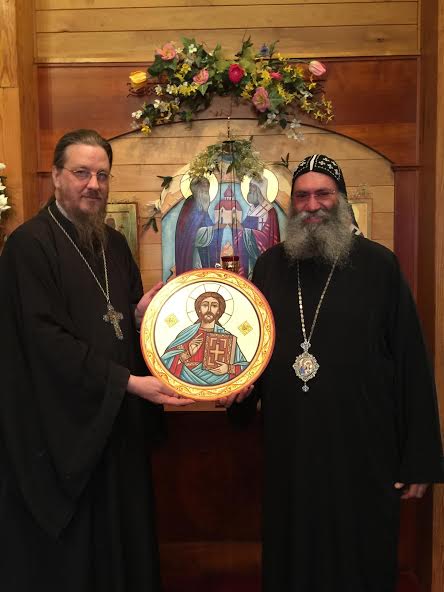 Bishop Suriel presents an icon in the Coptic tradition to Fr. John Behr.

Saint Vladimir’s Seminary Press, the publishing house of Saint Vladimir’s Orthodox Theological Seminary, has launched a new series highlighting the history and spirituality of the ancient Coptic Orthodox Church. The first book in the “Coptic Studies Series,” titled, The Life of Repentance and Purity, was authored by His Holiness, Pope Shenouda III and is scheduled for release by December 2015.  His Grace, Anba Suriel [Guirgis], Bishop of the Coptic Diocese of Melbourne and Affiliated Regions, Australia, who studied at Saint Vladimir’s from 1998–1999, is Series Editor for the new line of books.

Pope Shenouda’s book was first translated from Arabic in 1989 by Bishop Suriel and was published in 1991 by the Coptic Orthodox Publication and Translation Committee in Sydney. The new translation, also by Bishop Suriel, will include additions and patristic references and will be a joint publication between SVS Press and Saint Athanasius Press, the fledgling publishing house of Saint Athanasius Coptic Orthodox Theological College, Donvale, Australia, where Bishop Suriel serves as Dean.

“This is a big step for us,” noted Bishop Suriel.  “Being in cooperation with SVS Press, which is well known around the world—even outside of Orthodox circles—will provide more recognition of our own theological press.

“I am deeply indebted to Father Athanasius Farag, Father Bishoy Lamie, Phoebe Farag, and several others who worked tirelessly to prepare the manuscript that was presented to SVS Press,” he continued. “I am also grateful to Father John Behr, dean of Saint Vladimir’s, and to Michael Soroka and Deacon Gregory Hatrak, who are employed at SVS Press, for their hard work in assisting in bringing this work to light once more—in a much better edition!

“We hope to be able to publish more works in the future, especially with the new series, which we are very excited about,” he said. “We want not only to raise the profile of our school but also to emphasize the importance of Coptic studies.”

One of the titles that Bishop Suriel will propose for the “Coptic Studies Series” is a book about the life and work of Archdeacon Habib Girgis, former Dean of the Coptic Seminary, Cairo, Egypt, who was recently canonized by the Coptic Orthodox Church.  Saint Habib Girgis greatly influenced the Coptic community by urging its members to develop educational curricula that would revitalize their faith, which in the early 20th century was being challenged by foreign missionaries.

“The ties between Saint Vladimir’s Seminary and Saint Athanasius Coptic Orthodox Theological College have been strengthening during the past few years,” acknowledged Archpriest Dr. John Behr. “Both Bishop Suriel and I, as Deans of two theological institutions—who also happen to be close friends—highly value theological education and acknowledge the importance of rapprochement between the Oriental and Eastern Orthodox traditions in the 21st century.”

In 2013, Bishop Suriel hosted Father John during an eventful trip to Egypt, during which he was the guest of His Holiness, Pope Tawadros II of Alexandria.  During his visit, Father John delivered a paper titled “Orthodox Theological Education in the Twenty-First Century” at the “Theological and Ecclesiastical Institutes Seminar,” which explored the spiritual formation of theological students.  The seminar featured talks by eminent Coptic bishops, clergy, and scholars.

Bishop Suriel visited Saint Vladimir’s campus in 2013, at which time he met with Father John to discuss greater collaborative efforts between the two theological schools, including exchanges of students and faculty.  As a result, Father John, who also serves as Professor of Patristics at Saint Vladimir’s and is globally renowned in his field, will be teaching a Patristics course at Saint Athanasius

Thousands Gather to Bid Farewell to…

Metropolitan Hilarion of Volokolamsk Meets with…

On October 22, 2020, during his working visit to Syria, Metropolitan Hilarion…