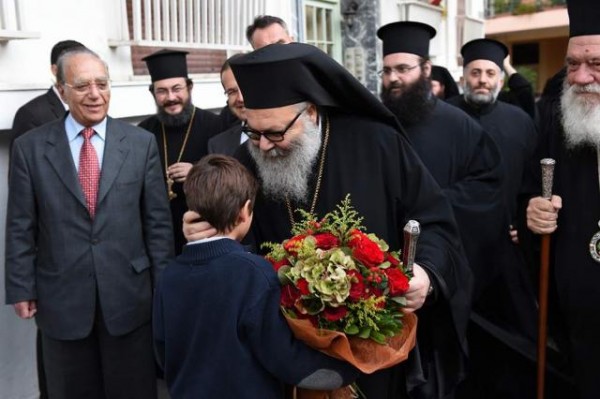 The gift, intended to aid suffering Orthodox Christians in Syria, will be presented to His Beatitude in December and will represent a tithe (one-tenth) of the Seminary’s #GivingTuesday appeal.

“Life has a deeper meaning than fighting crowds on Black Friday or scouring the web for the best deals on Cyber Monday,” said seminary Chancellor/CEO The Very Rev. Dr. Chad Hatfield. “That’s why St. Vladimir’s is participating in #GivingTuesday, a national day of charitable giving.

“Our seminary community felt impelled to share whatever is given to us with the Orthodox Christians in Syria, in light of their horrific plight,” he continued. “So, on December 2nd, whatever monies come in, we’re going give a full tithe to His Beatitude John X, who realistically will know how to distribute these funds ‘at ground zero’ so to speak. With each of our four generous supporters matching up to $5,000, it would be within reason to expect that we could potentially take in $25,000 on that day, with $2,500 going to our brothers and sisters in Syria.

“Right now, we’re asking Orthodox Christians in the U.S. to get help us get the word out on their social media networks, through Facebook (Twitter, and Instagram,” Fr. Chad concluded, “and to stay in the loop about this venture by signing up for #GivingTuesday emails.”

Patriarch John X will visit the U.S. to preside at the enthronement of His Eminence Metropolitan Joseph. Events related to the enthronement will take place during the weekend of December 5 through 7, 2014, at St. Nicholas Cathedral in Brooklyn, New York.

Read Patriarch John X’s recent interview on the state of the Church in Syria.

Most viewed articles
Growing Cold in Faith after a Few Years in Church: Is This Normal?174
How to Survive in Modern City. 8 Essential Conditions88
It’s All About the Resurrection – Reflecting on the Season84
Bishop Irenei Addresses a Symposium on “The Mother of God in Our Lives” in Los Angeles84
Russian Church to Help Provide Lebanon with Vaccines Against Coronavirus78
Over 20 Thousand People Pray for Discrimination of the Ukrainian Orthodox Church57
Volunteers from St George Greek Orthodox Church in Rose Bay gather to cook for the homeless46
Appeal for Help from the Church of the Mother of God in Austria36
Vandals Attack Serbian Church in Croatia31
We’re Being Robbed1
Most popular authors
Pravmir.com team250
Archpriest Nikolai Markovsky174
Fr. Andrei Gavrilenko88
Archpriest Gabriel Rochelle84
John Voutos46
Archpriest Georgy Kharlov36