Statement by the DECR Communication Service: Unia reminds of itself as a force sowing enmity and hatred 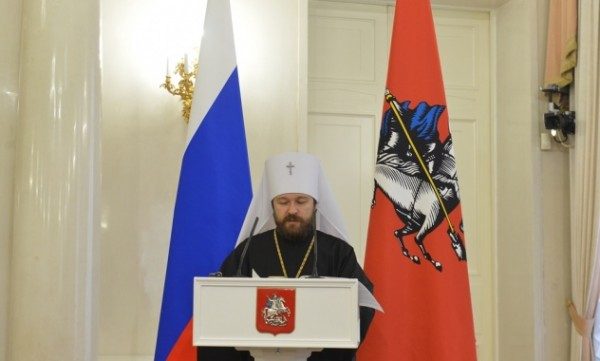 Covering hundreds and thousands of kilometers, encountering difficulties on their way because of the continued civil conflict in the country, the faithful were walking to meet halfway in order to ask together the Lord and the Most Holy Mother of God to put an end to the intestine strife, to make love, peace, goodness and inter-confessional harmony triumph in the much-suffering Ukrainian land.

However, even this good endeavor called to overcome divisions in the Ukrainian society met with cynical attacks and unfair accusations on the part of the Ukrainian Greek Catholic Church, which used this event to launch new vicious accusations against the canonical Ukrainian Orthodox Church. The UGCC Supreme Archbishop Sviatoslav Shevchuk gave an interview on July 24 to the UGCC Information Department, in which he stated that the All-Ukraine Procession with the Cross is a political pro-Russian action. According to the archbishop,  ‘the Moscow Patriarchate has often been used as a tool in the hands of the aggressor’. The head of the UGCC compared the procession to ‘a living shield made of civilians’ and warned that ‘if there are anti-Ukrainian slogans and provocations coming from the midst of participants in this procession with the cross, this will become an end of the Moscow Patriarchate in Ukraine’. The archbishop did not even stop at saying that among the Moscow Patriarchate clergy ‘there are many facts of behavior incompatible with the title of the citizen of Ukraine, and the Ukrainian Security Service should deal with them’.

These statements by the head of the UGCC, unbecoming not only to an archbishop but also to a Christian in general and aimed to enkindle inter-confessional strife and made in the genre of political denunciation cannot but provoke resentment and disgust in the hearts of the Orthodox faithful. Unia, which was imposed by fire and sword for centuries, today too demonstrates its animosity towards Orthodoxy. Again and again, contrary to the agreements achieved through great efforts on the high level between the Orthodox and the Catholic Churches,  systematically and consistently impeding a reconciliation between East and West.

On July 19, the IGCC carried on its official website an interview of the former head of this church Cardinal Lubomir Husar who accused the Supreme Authority of the Ukrainian Orthodox Church of insincerity and political motives: ‘These processions with the cross are proclaimed and organized by the Ukrainian Orthodox Church… It looks like a mean ruse. It is cynicism worse than anything imaginable’.

It is evident from these statements breathing hatred that canonical Orthodoxy continues to be a target for embittered attacks by Uniate leaders. For centuries the Uniates tried to avenge themselves on Orthodoxy with the help of the secular authorities when it was possible or with the help of various insinuations, forgeries and deceptions. And today by their politicized statements the Greek Catholic leaders again try to drive a wedge between the Orthodox and the Catholics, to hinder the normalization of inter-church relations and development of dialogue in Ukraine. It is clear that the UGCC leaders are not inclined to conduct any constructive dialogue with canonical Orthodoxy for the sake of peace and mutual understanding. Any initiative of the Ukrainian Orthodox Church, even such a noble one as the All-Ukraine Procession with the Cross, meets only with ferocious attacks on the part of the Greek Catholics.

Readily apparent in the actions of the Greek Catholics is the nature of unia, which emerged in the 16thcentury for political reasons. As it is noted in the document of the Joint Commission for Theological Dialogue between the Orthodox Church and the Roman Catholic Church, on ‘Uniatism, method of union of the past, and the present search for full communion’, Uniate ‘initiatives led to the union of certain communities with the See of Rome and brought with them, as a consequence, the breaking of communion with their Mother Churches of the East. This took place not without the interference of extraecclesial interests… so a situation was created which has become a source of conflicts and of suffering in the first instance for the Orthodox but also for Catholics’. The principle of division and conflict, which has been present in unia from the very beginning, continues in our time too to be a source of suffering for many people and serves as a dividing wall for achieving mutual understanding between the Orthodox and the Catholics.

In the Joint Statement of Patriarch Kirill of Moscow and All Russia and Pope Francis of Rome, signed on February 12, 2016, in Havana, along with the admission that ‘the past method of “uniatism”, understood as the union of one community to the other, separating it from its Church, is not the way to re–establish unity’, there is a call to reconciliation and search for mutually acceptable forms of co-existence between the Orthodox and the Greek Catholics (Par. 25). However, the UGCC leaders have not only failed to listen to this call but by attacking the Joint Declaration and its authors, Pope Francis and Patriarch Kirill, continue to deepen the confrontation in the Ukrainian society and to mar the relations between the Orthodox and the Catholic Christians.

Due to the rhetoric of the UGCC Supreme Archbishop Sviatoslav Shevchuk and Cardinal Lubomir Husar, unprecedented in its aggressiveness towards the canonical Ukrainian Orthodox Church and the Moscow Patriarchate on the whole, the Department for External Church Relations of the Moscow Patriarchate believes it an emergency task to revisit the issue of canonical and pastoral consequences of unia at the next plenary session of the Joint Commission for Orthodox-Catholic Dialogue planned for September 15-22, 2016, in Chieti, Italy. Is it possible to hold dialogue with the Roman Catholic Church on other theological issues at a time when the problem of unia continues to be a bleeding wound while the leaders of uniatism do not stop their blasphemous and politicized rhetoric aimed against the canonical Ukrainian Orthodox Church? Dialogue on the canonical and pastoral consequences of unia, forcibly interrupted through the fault of the Greek Catholics, should be resumed without delay.