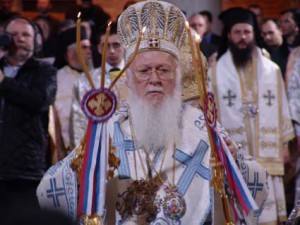 “With expectant joy and an abiding sense of fraternity, we look forward, later this year in the Holy City of Jerusalem, to our commemorative encounter with our beloved brother in Christ, His Holiness Pope Francis. This fiftieth anniversary of the historic meeting between the late Pope Paul VI and our ever-memorable predecessor Patriarch Athenagoras is an exceptional opportunity to deepen the fraternal bonds between Peter and Andrew, for both our Sees owe their foundations to them. For this reason, following in the footsteps of Pope Paul VI and Patriarch Athenagoras, we express our desire to further the relations between the Roman Catholic and the Orthodox Churches. Two thousand years ago, it was in Jerusalem where the Light dawned from the Tomb. May it be in Jerusalem again where the light of peace, mutual trust, and brotherly love shines brightly, for the sake of our two Churches and the sake of the whole world.”